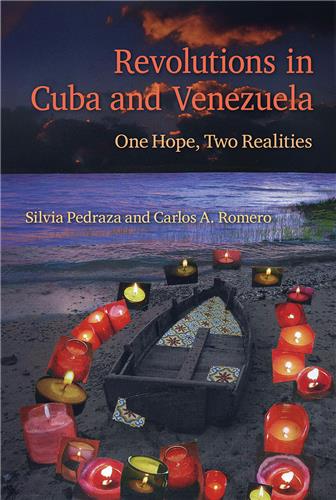 Revolutions in Cuba and Venezuela
One Hope, Two Realities

Silvia Pedraza and Carlos A. Romero

“The similarities between the Cuban revolution and Venezuela during Chavismo have been the subject of politicized and polarized analyses. This is the first effort to systematically compare the two governing experiences and examine the relationships between them.”—David A. Smilde, the Charles A. and Leo M. Favrot Professor of Human Relations at Tulane University; fellow, Washington Office on Latin America

Revolutions in Cuba and Venezuela compares the sociopolitical processes behind two major revolutions—Cuba in 1959, when Fidel Castro came to power, and Venezuela in 1999, when Hugo Chávez won the presidential election. With special attention to the Cuba-Venezuela alliance, particularly in regards to foreign policy and the trade of doctors for oil, Silvia Pedraza and Carlos Romero show that the geopolitical theater where these events played out determined the dynamics and reach of the revolutions.

Updating and enriching the current understanding of the Cuban and Venezuelan revolutions, this study is unique in its focus on the massive exodus they generated. Pedraza and Romero argue that this factor is crucial for comprehending a revolution’s capacity to succeed or fail. By externalizing dissent, refugees helped to consolidate the revolutions, but as the diasporas became significant political actors and the lifelines of each economy, they eventually served to undermine the social movements.

Using comparative historical analysis and data collected through fieldwork in Cuba and Venezuela as well as from immigrant communities in the U.S., Pedraza and Romero discuss issues of politics, economics, migrations, authoritarianism, human rights, and democracy in two nations that hoped to make a better world through their revolutionary journeys.

Silvia Pedraza, professor of sociology and American culture at the University of Michigan, Ann Arbor, is author of Political Disaffection in Cuba’s Revolution and Exodus. Carlos A. Romero, professor emeritus in the Institute of Political Studies at the Universidad Central de Venezuela, is coauthor of U.S.-Venezuela Relations since the 1990s: Coping with Midlevel Security Threats.

Publication of this work made possible by a Sustaining the Humanities through the American Rescue Plan grant from the National Endowment for the Humanities as well as the University of Michigan's Office of Research Publication Subvention Award.