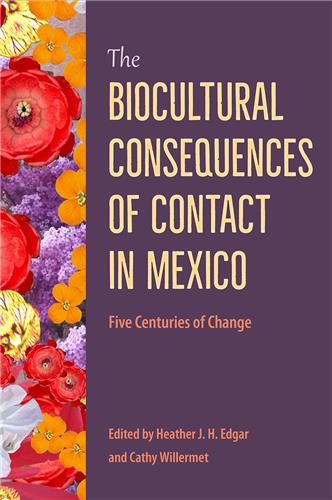 The Biocultural Consequences of Contact in Mexico
Five Centuries of Change


Examining the long-lasting effects of European colonization on Mexican populations

“Provides an array of innovative methods that reveal new facets of the biocultural consequences of colonization in Mesoamerica through the lenses of structural violence, labor, and reproduction across Spanish colonial taxonomic categories.”—Guido Pezzarossi, Syracuse University

The Biocultural Consequences of Contact in Mexico explores how Mexican populations have been shaped both culturally and biologically by the arrival of Spanish conquistadors and the years following the defeat of the Aztec empire in 1521. Contributors to this volume draw on a diverse set of methods from archaeology, bioarchaeology, genetics, and history to examine the response to European colonization, providing evidence for the resilience of the Mexican people in the face of tumultuous change.
Essays focus on Central Mexico, Yucatan, and Oaxaca, providing a cross-regional perspective, and they highlight Mexican scholars’ work and viewpoints. They examine the effects of the castas system—which the colonizers used to organize society according to parentage and the social construction of race—on individuals’ and groups’ access to power, social mobility, health, and mate choice. Contributors illuminate the poorly understood extent that this system—and the national identity of mestizaje that replaced it—caused inequality and the structural violence of stress and health disparities, as well as genetic admixture.

Five hundred years after the Spanish first clashed with Aztec forces and began to influence modern Mexico, this volume adds to discussions of colonialism, the reconstruction of biosocial relationships, and the work of decolonization. Students and scholars in anthropology and history will gain insights into how human populations transform and adapt in the wake of major historical events that result in migration, demographic change, and social upheaval.

A volume in the series Bioarchaeological Interpretations of the Human Past: Local, Regional, and Global Perspectives, edited by Clark Spencer Larsen