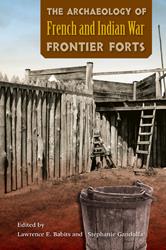 "The best compilation of work about the French and Indian War to date."--James Parker, coauthor of Archaeology at Fort Mims

"Provides images of life on the expanding American frontier of the mid-eighteenth century. A unique and significant discussion of the French and Indian War."--Clarence R. Geier, coeditor of Huts and History: The Historical Archaeology of Military Encampments during the American Civil War


Fort Ticonderoga, the allegedly impenetrable star fort at the southern end of Lake Champlain, is famous for its role in the French and Indian War. From barracks to bastions, many other one-of-a-kind forts were also instrumental in staking out the early American colonial frontier. This collection of essays presents an overview of the fortifications that guarded the frontiers and borderlands between Native Americans, French settlers, and Anglo-American settlers. Civilian, provincial, or imperial, the fortifications examined here range from South Carolina’s Fort Prince George to Fort Frontenac in Ontario and Fort de Chartres in Illinois.

As Europeans and colonists struggled to control the lucrative fur trade routes of the northern boundary, these strongholds were part of the first serious arms race on the continent. Contributors to this volume reveal how the French and British adapted their fortification techniques to the special needs of the North American frontier. By exploring the unique structures that guarded the borderlands, this book reveals much about the underlying economies and dynamics of the broader conflict that defined a critical episode of the American experience.

Lawrence E. Babits is retired director of the Program in Maritime Studies at East Carolina University and coeditor of Fields of Conflict: Battlefield Archaeology from the Roman Empire to the Korean War. Stephanie Gandulla is media and outreach coordinator at Thunder Bay National Marine Sanctuary.

“In this exceptional volume, the authors bring archaeology to the study of this key conflict. Fifteen noted scholars contribute important articles on a good sampling of these forts and the military strategy they represented…an important contribution to a field of study that is just taking off. It sets the stage for new investigations of the dozens of frontier forts that remain unexplored.”
--American Archaeology

“A welcome addition to the history of this period….It is an exceptional volume for students of the French and Indian War at any level.”
--Northwest Ohio History

“Fills a large gap in the archaeological literature related to the French and Indian war… a fine collection.”
--Midcontinental Journal of Archaeology

“For anyone interested in the French and Indian War period, this book is invaluable.”
--Newsletter of the Archaeological Society of Maryland

“A must read for those with an interest in fortifications and military history… highly recommended.”
--Choice

“A useful addition to the scholarship on forts, Native-European interactions, and military life on the colonial frontier during the Seven Years’ War and a fine example of the insights archaeologists can offer military historians.”
--H-Net

“The details of the various human artifacts dug up… will be fascinating to those persons interested in the material culture of colonial times and its relevance to contemporary social stratification, namely, the sharp contrast between the lower living standards of the hoi-polloi and the high life of the elites, afternoon tea and the like.”
--Journal of Military History

An essential source book for anyone interested in the physical characteristics and archaeological representation of mid-to-late eighteenth-century fortified sites in eastern North America.
--Illinois Archaeology

The first volume of its kind to examine French and Indian War frontier fortifications specifically, and by employing a combined archaeological and historical perspective it stands as a unique volume.
--Canadian Journal of Archaeology

From These Honored Dead: Historical Archaeology of the American Civil War