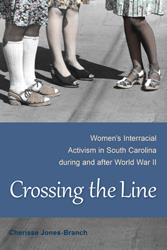 "Combines a remarkable amount of close research with a deep understanding of the role of gender in the making of the Freedom Struggle. This book will hold a place of honor on the growing shelf of scholarship on the movement in South Carolina."--W. Scott Poole, author of Monsters in America: Our Historical Obsession with the Hideous and the Haunting

Although they were accustomed to a segregated society, many women in South Carolina--both black and white, both individually and collectively--worked to change their state’s unequal racial status quo. In this volume, Cherisse Jones-Branch explores the early activism of black women in organizations including the NAACP, the South Carolina Progressive Democratic Party, and the South Carolina Federation of Colored Women’s Clubs. At the same time, she discusses the involvement of white women in such groups as the YWCA and Church Women United. Their agendas often conflicted and their attempts at interracial activism were often futile, but these black and white women had the same goal: to improve black South Carolinians’ access to political and educational institutions.

Examining the tumultuous years during and after World War II, Jones-Branch contends that these women are the unsung heroes of South Carolina’s civil rights history. Their efforts to cross the racial divide in South Carolina helped set the groundwork for the broader civil rights movement of the 1960s and 1970s.

By tracing the long trajectory of women’s activism in [South Carolina], Jones-Branch shows the fits and starts, limitations, digressions, and accomplishments of female interracial activism.
--Journal of American History

A convincing argument for why the important and sometimes contentious work done by the women profiled here provided necessary groundwork for those who would.
--American Historical Review

Making use of personal and organizational records in addition to numerous oral histories, Jones-Branch provides exacting details as she explores women’s interaction across racial, religious, and organizational lines. . . .A new piece to the puzzle of how women operated to effect change early in the civil rights movement.
--South Carolina Historical Magazine

An enlightening, well-written, and timeley study. It should be read by anybody with an interest in the development--and continually unfolding story--of racial justice in American society.
--Florida Historical Quarterly