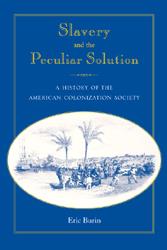 Slavery and the Peculiar Solution:
A History of the American Colonization Society

"An exceptional work that will stand for years as the best study of the African colonization movement. Burin's insights into this often misunderstood idea will be appreciated by all historians of the early national era. The research, both archival and secondary, is excellent."--Douglas Egerton, Le Moyne College

"Burin adds significantly to our understanding of the world view of slaveholding colonizationists, of their negotiations with prospectively freed people, and of their struggle with proslavery critics of colonization. . . . Historians of proslavery thought will find new ideas and information here."--Torrey Stephen Whitman, Mount St. Mary’s College

From the early 1700s through the late 1800s, many whites advocated removing blacks from America. The American Colonization Society (ACS) epitomized this desire to deport black people. Founded in 1816, the ACS championed the repatriation of black Americans to Liberia in West Africa. Supported by James Madison, James Monroe, Henry Clay, and other notables, the ACS sent thousands of black emigrants to Liberia. In examining the ACS’s activities in America and Africa, Eric Burin assesses the organization’s impact on slavery and race relations.

Burin focuses on ACS manumissions—that is, instances wherein slaves were freed on the condition that they go to Liberia. In doing so, he provides the first account of the ACS that covers the entire South throughout the antebellum era. He investigates everyone involved in the society’s affairs, from the emancipators and freedpersons at the center to the colonization agents, free blacks, southern jurists, newspaper editors, neighboring whites, proslavery ideologues, northern colonizationists, and abolitionists on the periphery. In mixing a panoramic view of ACS operations with close-ups on individual participants, Burin presents a unique, bifocal perspective on the ACS.

Although colonization leaders initially envisioned their program as a pacific enterprise, in reality the push-and-pull among emancipators, freedpersons, and others rendered ACS manumissions logistically complex, financially troublesome, legally complicated, and at times socially disruptive enterprises. Like pebbles dropped in water, ACS manumissions rippled outward, destabilizing slavery in their wake. Based on extensive archival research and a database of 11,000 ACS emigrants, Burin’s study offers new insights concerning the origins, intentions, activities, and fate of the colonization movement.

Eric Burin is assistant professor of history at the University of North Dakota.

"A meticulously researched biography of one of the oft-overlooked cul-de-sacs in American history . . . An excellent book about a subject of real importance."
--The Virginia Quarterly Review

"Burin's research is impressive. Slavery and the Peculiar Solution is an excellent book and an important contribution to the study of slavery and race in America."
--The North Carolina Historical Review

"Conveys the image of chattel slavery not as a monolithic structure controlling all masters and slaves everywhere but as a constantly changing entity throbbing with painful issues of personal and private rights in conflict with predominant opinions about social cohesion and custom. States and local governments passed differing laws regarding the freeing of slaves and the control of freedmen after manumission. The result is a refreshingly complex picture of American slavery."
--History: Reviews of New Books

"Burin's study looks at the ACS as a complex whole. He explores the motives underlying manumission, the complex negotiations involved in the manumission process (both private and institutional), the transatlantic implications of colonization for former slave-owners as well as the enslaved free blacks, emigrants, and returnees, and the conditions in Liberia for migrants. This framework combines social, political, legal, and transnational history to construct a nuanced and complex portrait of a difficult chapter in American, Southern, African, and African American history."
--Itinerario

"For anyone interested in understanding the operation of the ACS and the various responses to it, Burin's book should serve them well."
--The Journal of American History

"Slavery and the Peculiar Institution should be required reading for anyone interested in research on colonization, both for its impressive research and for the many exciting questions it raises."
--H-Net Book Review

Eric Burin's fine new study offers one of the most insightful treatments of colonization in years. His cogent and provocative book makes a substantial case for colonization's centrality to antebellum political and cultural debate.
--The Pennsylvania Magazine of History and Biography

…full of nuggets of new insights…Every historian working on colonization will want to read and engage this provocative history of the experience of African colonization for the manumitted, the manumitters, and their proslavery critics.
--American Historical Review

Burin does not deny or shy away from the conflicting impulses driving the ACS project. …an important addition to the historiographical debates that continue to surround this paradoxical institution.
--Civil War History

…balanced, accesible, and thorough…Burin's in-depth archival research and use of sound local history offer an excellent model for how future scholars should approach the ACS.
--The Journal of African American History

Burin has engaged in exhaustive analysis of ACS records to create a comprehensive database regarding society manumissions and Liberian emigrants…should be required reading…for its impressive research and for the many exciting questions it raises.
--H-Net Reviews

" Burin's ability to gie voice to eighteenth-century blacks is remarkable. His analysis of the transatlantic importance of life in Liberia is illuminating. Burin has secured a relevant place in the historiography of colonization."
--Southern Historians

" A refreshing addition to contentious historiography on the ACS."
--Journal of the Early Republic

Slavery and the Peculiar Solution: A History of the American Colonization Society