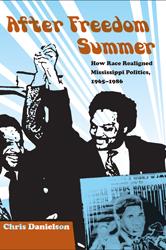 "A brilliant history of black politics and white resistance in post-civil rights era Mississippi. Danielson’s work helps to fill the yawning gap in the black politics historiography between the Black Power movement and contemporary black politics. Additionally, he makes a critical contribution to the literature of the racial realignment of the two major political parties. A must-read!"--G. Derek Musgrove, University of the District of Columbia

"A sobering account of what happened after the singing and marching stopped. Danielson's masterful analysis of Mississippi's racially divided electorate proves that, despite the election of hundreds of blacks to public office, whites still hold all the levels of political power."--John Dittmer, author of Local People: The Struggle for Civil Rights in Mississippi

No one disagrees that 1964--Freedom Summer--forever changed the political landscape of Mississippi. How those changes played out is the subject of Chris Danielson’s fascinating new book, After Freedom Summer.
Prior to the Voting Rights Act of 1965, black voter participation in Mississippi was practically zero. After twenty years, black candidates had made a number of electoral gains. Simultaneously, white resistance had manifested itself in growing Republican dominance of the state.
Danielson demonstrates how race--not class or economics--was the dominant factor in white Mississippi voters' partisan realignment, even as he reveals why class and economics played a role in the tensions between the national NAACP and the local Mississippi Freedom Democratic Party (an offshoot of SNCC) that limited black electoral gains.
Using an impressive array of newspaper articles, legal cases, interviews, and personal papers, Danielson's work helps fill a growing lacuna in the study of post-civil rights politics in the South.

"Confirms the huge limitations of the two-party structure and the inescapability of race in the Deep South."
--Journal of American History

"A well researched work that is essential for any student wishing to understand modern Mississippi politics."
--Southern Historian

"By bringing together Mississippi’s diverse cast of political actors in one compelling narrative, Danielson has performed a valuable service."
--Journal of American Studies

"Shows that race remains at the absolute center of Mississippi politics, despite politicians' constant refuge in race-blind drivel…As such, the book is exceptionally powerful."
--The Journal of Southern History

“Danielson questions recent interpretations of political realignment in the Sunbelt that focus on class and economics… Danielson’s readable book will be the starting point for those interested in post-1965 civil rights struggles in Mississippi.”
--Journal of American Ethic History