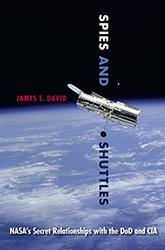 Spies and Shuttles
NASA's Secret Relationships with the DoD and CIA

"A pioneering work. David has performed a herculean task by pulling together for the first time hundreds of formerly classified documents to tell the fascinating story of NASA's intimate and extremely sensitive relations with the CIA and other branches of the intelligence community over the past fifty-plus years."--Matthew M. Aid, author of Intel Wars: The Secret History of the Fight against Terror

"Reveals the long, complicated, and fascinating relationship between NASA, the Department of Defense, and the intelligence community."--Jeffrey T. Richelson, author of Defusing Armageddon

"Everyone who's interested in space history has always known there was a relationship between the U.S. defense community and NASA. The shuttle era was the heyday of that relationship. For the first time, this book really captures just how deep that relationship was even before the shuttle era and how the defense and intelligence communities cooperated with and influenced NASA."--David Christopher Arnold, editor of Quest: The History of Spaceflight Quarterly


In this real life spy saga, James David digs through newly declassified documents to ultimately reveal how NASA became a strange bedfellow to the Department of Defense (DoD) and the Central Intelligence Agency. Beginning with the establishment of NASA in 1958, he follows the agency through its growth, not only in scope but also in complexity, exposing the ties between spaceflight and the intelligence community that have historically remained unexplored.

David tracks NASA's early cooperation--supplying cover stories for covert missions, analyzing the Soviet space program, providing weather and other scientific data from its satellites, and monitoring missile tests--and reveals how these extensive interactions eventually devolved into NASA's reliance on DoD for political and financial support for the Shuttle. This riveting book aptly demonstrates that the hidden connections between these entities were far greater and deeper than previously known.

James E. David is a curator in the Division of Space History at the Smithsonian National Air and Space Museum.

An exciting book that gives us an informed report and documents secret interactions between the various entities that populate the civilian and military space programs of the United States.
--De la Terre à la Lune

Offers one of the best analyses to date of the long, and often difficult, history of interaction between NASA and the national security community.
--The Space Review

A valuable window into the workings of NASA and the impact that defense and intelligence efforts have on civilian science. . . .An excellent book: descriptive, informative, and engaging.
--H-Net Reviews