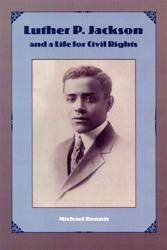 Luther P. Jackson and a Life for Civil Rights

From the foreword:
"Carefully researched, elegantly written, and thoughtfully argued. . . . A superb case study of a professor who plowed the fields of racial change in Virginia before, during, and following World War II. . . . Jackson's determined and indefatigable voting rights crusade helped blacks move from the past to the present, from the indignities of Jim Crow to the new freedoms and responsibilities of full citizenship."

"No student of mid-century America can fully understand the transformation of the South and the origins of the civil rights movement without reference to the work and life of Luther P. Jackson. . . . [This work] sheds light on the evolution of African-American ideology, the roots of the civil rights movement, and the unraveling of segregation."--Andrew Lewis, coeditor of The Moderates' Dilemma: Massive Resistance to School Desegregation in Virginia

During the 1930s and 1940s, when America had little interest in addressing racial inequality, Luther P. Jackson became a leading voice in the struggle for racial justice. This biography tells the story of the professor and political activist who cajoled, implored, and lobbied black Virginians to vote--a man who fervently believed that education was at the core of the search for social change.

Long before the sit-ins and freedom marches of the 1960s, Jackson strove to erase the assumptions of racial inferiority that infected African Americans. Understanding that blacks had to change their minds before they could change their world, he set out to make people "vote conscious."

Descended from ex-slaves, Jackson was born in 1892, attended school in Lexington, Kentucky, and received bachelor’s and master’s degrees from Fisk University in Tennessee and a Ph.D. from the University of Chicago. Until his untimely death in 1950, he taught at Virginia State University in Petersburg. Convinced that teachers could sow the seeds of racial equality, he mobilized them along with their students and families. By publishing, organizing, and proselytizing on behalf of voting, Jackson stimulated a political awakening among black Virginians.

As a target for racial recrimination and hostility, Jackson walked a tightrope of protest and accommodation, one that jeopardized his health, family, and career. Yet he was a tenacious optimist with faith in the political process. He took the long view, Michael Dennis notes, recognizing that failed legislative maneuvers did not render conventional institutions useless.

Largely forgotten, even in Virginia, until the author resurrected his story, Jackson was involved in almost every important civil rights and liberal initiative in the South in the second quarter of the 20th century. His forceful program of political education laid the groundwork for the full-fledged assault on segregation of the 1950s, when Martin Luther King and other leaders of the civil rights movement emerged to stand on Jackson's shoulders.

"Joins the growing list of studies that stress the 1930s and 1940s as a real flourishing of civil rights activism, rather than as 'simply a preamble to what would come later." "This is a fine study of a neglected figure."
--Choice

"Dennis's short work is an unexpected gem. Rigorously researched, richly contextualized, and nicely written, Dennis's book has rescued Jackson from undeserved obscurity and placed him solidly in the ranks of those African American intellectuals from the 1920s through the post-World War II years."
--The Journal of American History

"Those who would understand the founders of the civil rights movement in Virginia must understand the life's work of Luther Porter Jackson. Thanks to Michael Dennis's new book, we can."
--Virginia Libraries