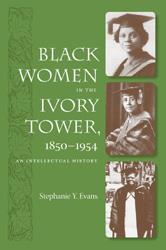 Black Women in the Ivory Tower, 1850–1954
An Intellectual History

Stephanie Y. Evans is professor of Black women's studies and director of the Institute for Women's, Gender and Sexuality Studies at Georgia State University. Her many books include Black Women's Yoga History: Memoirs of Inner Peace and Black Women and Social Justice Education: Legacies and Lessons.