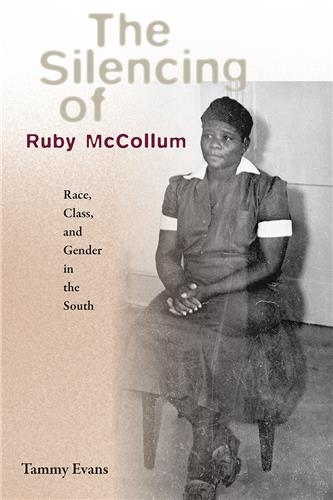 The Silencing of Ruby McCollum
Race, Class, and Gender in the South

"This groundbreaking work reads like a murder mystery, only in this case what has been killed is our American integrity and the right of an individual to a fair trial. Evans has finally addressed the pervasive silence that distorts, fragments, and threatens to bury the history of so many southern places and people."--Rebecca Mark, Tulane University

The Silencing of Ruby McCollum refutes the carefully constructed public memory of one of the most famous--and under-examined--biracial murders in American history. On August 3, 1952, African American housewife Ruby McCollum drove to the office of Dr. C. LeRoy Adams, beloved white physician in the segregated small town of Live Oak, Florida. With her two young children in tow, McCollum calmly gunned down the doctor during (according to public sentiment) "an argument over a medical bill." Soon, a very different motive emerged, with McCollum alleging horrific mental and physical abuse at Adams's hand. In reaction to these allegations and an increasingly intrusive media presence, the town quickly cobbled together what would become the public facade of Adams's murder--a more "acceptable" motive for McCollum's actions. To ensure this would become the official version of events, McCollum's trial prosecutors voiced multiple objections during her testimony to limit what she was allowed to say.

Employing multiple methodologies to achieve her voice--historical research, feminist theory, African American literary criticism, African American history, and investigative journalism--Evans analyzes the texts surrounding the affair to suggest that an imposed code of silence demands not only the construction of an official story but also the transformation of a community's citizens into agents who will reproduce and perpetuate this version of events, improbable and unlikely though they may be.

Tammy Evans is professor of practice at the Argosy University’s Sarasota campus, where she teaches composition and literature.

Ruby McCollum, a black woman, was tried for murdering a white doctor who she claimed mentally and physically abused her. Evans uses the trial--which was covered by novelist Zora Neale Hurston--to examine the institutionalized silence that surrounded black women in the 1950s South.
--MS Magazine

A superb study that those interested in history, literature, gender and race studies, and the politics of oppression will find invaluable in understanding the ongoing complexities of race relations informed by gender and class in the United States.
--Journal of Southern History

An interesting book about the rhetoric of silence. Evans cleverly shows how fear, race, class, gender, power, and silence all contributed to the crafting of a public Ruby McCollum and in doing so gives McCollum a voice.
--The Historian

Evans presents an intriguing and compelling study of the race, gender, and class dynamics of segregated small-town Florida at mid-century.
--Tampa Bay History

Reveals the powerful memory work accomplished by southerners’ reticence or refusal to speak. . . . [and] demonstrates the rhetorical value of muteness and the scholarly value of looking at public memory as a product not only of stuff but also of absence.
--H-Net Reviews

A tour de force that locates the unique forms of control and persuasion enacted by southern culture, and their meaning for the writing of history and historical memory alike. . . . A tremendously successful and engaging book.
--Florida Historical Quarterly