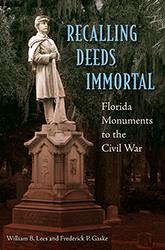 "A comprehensive examination of the ways in which the wartime service and sacrifice of Floridians has been memorialized from the Reconstruction Era through the present. A valuable contribution to the subject of Civil War Memory."--David J. Coles, coeditor of A Yankee Horseman in the Shenandoah Valley

"A complete guide. The authors locate every Civil War monument in Florida and explain their symbolism."--Daniel L. Schafer, author of Thunder on the River: The Civil War in Northeast Florida


One hundred and fifty years ago, Florida was shaken by battle, blockade, economic deprivation, and the death of native sons both within and far outside its borders. Today, tributes to the valor and sacrifice of Florida’s soldiers, sailors, and civilians can be found from the Panhandle to the Keys. Authors Lees and Gaske look at the diversity of Civil War monuments built in Florida between Reconstruction and the present day, elucidating their emblematic and social dimensions.

Most monuments built in Florida honor the Confederacy, praising the valor of Southern soldiers and often extolling the righteousness of their "Lost Cause." At the same time, a fascinating minority of Union monuments also exists in the state--and these bear notably muted messages. Recalling Deeds Immortal shows how the creation of these bronze and stone monuments created new social battlegrounds as, over the years, groups such as the Ladies’ Memorial Associations, United Daughters of the Confederacy, and the Grand Army of the Republic competed to control the messages behind the memorialization of fallen soldiers and veterans. Examining the evolution of Civil War monuments, the authors demonstrate that the construction of these memorials is itself an important part of Civil War and post-Civil War history.

A comprehensive social history of the memorialization of [Florida soldiers] from Reconstruction to the present, tracing the efforts of various organizations to control the messages conveyed by these bronze and stone markers.
--Civil War Books and Authors

A first-rate scholarly study that illuminates how and why these monuments were erected in Florida’s postwar, poverty-stricken conditions....An indispensable memory study for those with an interest in historic Florida.
--Civil War News

A thorough catalogue of Civil War monuments in Florida that ably highlights initiatives of interest beyond the state.... A treasure trove of information.
--Civil War Book Review

Elucidates the movers and shakers that over time have manufactured the ‘Lost Cause’ scenario in the state once characterized by Whitelaw Reid as ‘the smallest tadpole in the dirty pool of secession.’
--Civil War Monitor

By carefully and thoroughly researching Florida’s monuments and then situating them within the larger histories of the Civil War, the evolution of Civil War and southern memory, and the sociocultural changes in the South, Lees and Gaske have written an engaging, informative, and useful book.
--Florida Historical Quarterly

As well worth a dip or two as the clear waters off the Sunshine State’s beaches.
--Journal of America’s Military Past

Lees and Gaske’s detailed text is accessibly written for a range of audiences, and their exhaustive efforts have generated a unique resource.
--Journal of Southern History