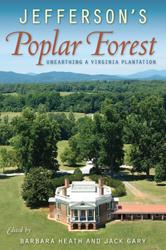 
One hundred years in the life of a founding father 's 5,000 acre "retreat"

"Poplar Forest embodies the culmination of Jefferson's vision of the American agricultural ideal. This highly readable volume introduces us to the people, objects, and landscapes of Poplar Forest in the tumultuous period between the Revolution and the Civil War. Jefferson's Poplar Forest presents a remarkably multidimensional portrait of the estate as a personal retreat, a designed landscape, a plantation, and a home and workplace for enslaved African American families."--Lu Ann De Cunzo, University of Delaware

"With their productive commitments to long-term and interdisciplinary research, the contributors draw upon the traditional themes of slavery and plantation landscapes but imbue those with new energy through incorporating the issues of ecology, identity, agency, and consumerism."--Douglas Sanford, University of Mary Washington

Thomas Jefferson once called his plantation Poplar Forest, "the most valuable of my possessions." For Jefferson, Poplar Forest was a private retreat for him to escape the hordes of visitors and everyday pressures of his iconic estate, Monticello.
Jefferson's Poplar Forest uses the knowledge gained from long-term and interdisciplinary research to explore the experiences of a wide range of people who lived and worked there between the American Revolution and the Civil War. Multiple archaeological digs reveal details about the lives of Jefferson, subsequent owners and their families, and the slaves (and descendants) who labored and toiled at the site. From the plantation house to the weeds in the garden, Barbara Heath, Jack Gary, and numerous contributors examine the landscapes of the property, investigating the relationships between the people, objects, and places of Poplar Forest.
As the first book-length study of the archaeology of a president's estate, Jefferson's Poplar Forest offers a compelling and uniquely specific look into the lives of those who called Poplar Forest home.

Barbara J. Heath is associate professor of anthropology at the University of Tennessee and author of Hidden Lives: The Archaeology of Slave Life at Thomas Jefferson’s Poplar Forest. Jack Gary is director of archaeology and landscapes at Poplar Forest.

"A fascinating report on cutting edge historical archaeology that ties the written record together with the archaeological findings to produce a much clearer picture of what life at an important Virginia plantation was like in the early years of the republic."
--American Archaeology

"Adds to our understanding of the complex and often-fluid relationships between master and slave, as well as master and landscape, and the implications of an increasingly accessible marketplace of both goods and ideologies. Jefferson's Poplar Forest will stand as a benchmark as the field of plantation archaeology, and indeed interdisciplinary studies, continues to evolve."
--Virginia Magazine of History and Biography

"The authors present rich interpretations based on the available data and offer insightful questions to guide future research at Poplar Forest and other Virginia plantations."
--Historical Archeology

“The everyday, seemingly unremarkable artifacts of life as it was lived at Poplar Forest provide perhaps some of the most powerful evidence for a new kind of understanding of the third president and, to some extent, late 18th and early 19th century plantation life… a book that truly does discover ‘something new’ about Jefferson by placing him in the kind of context his writings do not always do.”
--Northeast Historical Archaeology

Barbara Heath and Jack Gary have assembled a comprehensive volume on recent archaeological work at a prominent Piedmont plantation . . . Jefferson’s Poplar Forest: Unearthing a Virginia Plantation is a cohesive and well-conceived volume that will be of use to historical archaeologists studying similar resources.
--Southeastern Archaeology