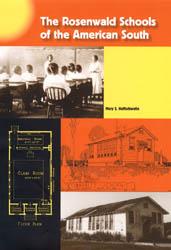 The Rosenwald Schools of the American South

"What a story! African American grassroots activists hungry for education, a generous gift from the Jewish CEO of mass-merchant Sears, Roebuck, public-private partnerships forged with white officials in thousands of counties across 15 southern states. Mary Hoffschwelle brings us a forgotten story of sacrifice and hope from the darkest days of early-twentieth century segregation."--Tom Hanchett, Levine Museum of the New South

Hoffschwelle tells the story of a remarkable partnership to build model schools for black children during the Jim Crow era in the South. The Rosenwald program, which erected more than 5,300 schools and auxiliary buildings between 1912 and 1932, began with Booker T. Washington, then principal of Tuskegee Institute, who turned for financing to Julius Rosenwald, president of Sears, Roebuck & Company. By requiring communities to raise matching funds, the two men inspired a grassroots movement that built schools in 15 southern states.

The Rosenwald schools, scores of which still stand, exemplified the ideal educational environment--designed for efficiency, making full use of natural light to protect children’s eyesight, and providing sufficient space for learning. Ironically, these schools, which represented the social centers of their African American communities, also helped to set standards for white schools.

Though the program's funding ended with Rosenwald's death in 1932, many continued as public institutions. The National Trust for Historic Preservation named Rosenwald Schools to its list of America’s Most Endangered Historic Places in 2002. Hoffschwelle examines these buildings as exemplars for school architecture and design, as community institutions and partnerships, and as a means of formalizing a state education program that, finally, would include black children. This story of extraordinary generosity and sacrifice will interest scholars of American and African-American history, educators, school planners, and preservationists.

"An excellent resource concerning the rural school building program financed by Julius Rosenwald between 1913 and 1932...Hoffschwelle's book provides a more in-depth look at the Rosenwald Fund than have previous studies."
--The Chronicles of Oklahoma

"The detail of the discussion, the reliance on considerable primary evidence, and the overall contribution ot the understanding of the development of southern education make this a valuable addition to the historical literature on the South…Highly recommended."
--Choice

"Hoffschwelle assesses the strengths and weaknesses of the program and its larger significance for the status of African Americans and southern race relations in the early twentieth century."
--American Historical Review

"Unravels the philanthropic, architectural, and bureaucratic strands that make up the complicated fabric of the Rosenwald school-building program. . . . a fascinating study."
--Florida Historical Quarterly

"Successfully depicts the schools as integral to the African American communities they served in that the schools and what they represented—black agency in providing education for the community—were focal points of African American southern identity and local pride."
--Journal of American Ethnic History

"The layers of this book are tied together by the extraordinary detail of the archival research. . . . [A] tribute to the multi-layered institution of the Rosenwald schools."
--The Southern Quarterly

"A welcome addition not only to the study of architectural history in the South but also to the topic of American school architecture."
--Journal of the SE Chapter of the Society of Archaeological Historians

"The definitive history of the Rosenwald school-building program."
--The South Carolinia Historical Magazine

"Explores the material and cultural impact of the schools on southern African American and white communities in order to explore the meanings of identity and activism."
--Journal of Southern History

"[A] compelling narrative, a breadth of scope, and a sophistication of interpretation that make this a must-read for anyone interested in American cultural history."
--Winterthur Portfolio: A Journal of American Material Culture

"Those interested in an administrative history of the Rosenwald Fund--an important foundation in the history of black education in the South--will find merit in this book."
--Louisiana History

“Considers the monumental influence of Rosenwald schools… [which] contributed greatly to the formation of public schooling in in general in the early twentieth-century South… meticulously researched and well-written.”
--Southwestern Historical Quarterly

“Meticulous research combined with insightful analysis and excellent prose… a sophisticated analysis of the interaction of the Rosenwald Fund with southern state officials, local governments, and rural black communities that gives us new insights into the Jim Crow society of the South during the first third of the twentieth century.”
--History: Reviews of New Books

The Rosenwald Schools of the American South