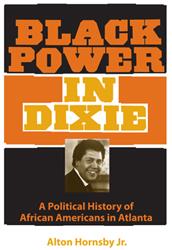 "Offers a much needed discussion of racial politics in the premier New South city. Readers will discover that courageous struggles for justice, as much as compromise, have marked the so-called Atlanta-style since Reconstruction."--W. Scott Poole, College of Charleston

Atlanta stands out among southern cities for many reasons, not least of which is the role African Americans have played in local politics. Black Power in Dixie offers the first comprehensive study of black politics in the city.

From Reconstruction to recent times, the middle-class black leadership in Atlanta, while often subordinating class and gender differences to forge a continuous campaign for equality, successfully maintained its mantle of racial leadership for more than a century through a deft combination of racial advocacy and collaboration with local white business and political elites.

Alton Hornsby provides an analysis of how one of the most important southern cities managed, adapted, and coped with the struggle for racial justice, examining both traditional electoral politics as well as the roles of non-elected individuals influential in the community. Highlighting the terms of Maynard Jackson and Andrew Young, the city's first two black mayors, Hornsby concludes by raising important questions about the success of black political power and whether it has translated into measurable economic power for the African American community.

Richly detailed. . . . Hornsby's summary of the scholarly theories that have been used to explain African American leadership is a valuable bonus. Particularly useful for scholars of Dixie.
--Choice

There is definite value to Hornsby's exploration of how this group's singular focus on electoral politics had mixed political outcomes for the majority of African Americans. Most important, Black Power in Dixie shows that increased numbers of black elected officials did not reduce black poverty or result in long-term economic development for Atlanta's African Americans. It not only enriches the historiography on Atlanta but also makes an important contribution to the vital field of postwar black freedom struggles.
--Journal of Southern History

Offers a revealing genealogy of a politically active black community and the complex political machinery of one of the South's most important cities.
--Journal of African American History

Hornsby succeeds masterfully in synthesizing a vast array of secondary and primary sources into a highly readable account of black politics in Atlanta.
--American Historical Review

Provides an analysis of how one of the most important southern cities managed, adapted and coped with the struggle for racial justice.
--Ethnic and Racial Studies

Black Power in Dixie: A Political History of African Americans in Atlanta