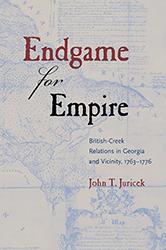 Endgame for Empire
British-Creek Relations in Georgia and Vicinity, 1763–1776

"Since so much of Indian-European relations and the course of the American Revolution in the South pivoted on how the Creeks and British dealt with each other, illuminating that relationship is of critical importance. Juricek demonstrates an absolute mastery of the sources and a bone-deep understanding of the nuances of both Creek and British culture."--Joshua Piker, author of Okfuskee: A Creek Indian Town in Colonial America

"A much-needed modern treatment of colonial Indian relations in the South. Plumbing the depths of archival sources, Juricek brings to life the dramas behind treaty negotiations and diplomatic meetings between the colony of Georgia and the Creek Indians."--Robbie Ethridge, author of Creek Country: The Creek Indians and Their World


The process of European colonization was not simply a matter of armed invaders elbowing themselves into position to take charge. Like the other imperial powers, the British found that maintaining their American empire required complicated negotiations with Indians. On the other hand, the British developed a unique approach to the legal issues of colonization.

By 1763, Britain had defeated Spain and France for dominance over much of the continent and renewed efforts to repair relations with Indians, especially in the southern colonies. Over the ensuing decade the reconstitution of once-promising British-Creek relations stalled and then collapsed, ultimately leading the southeastern colonists directly into the arms of the patriot cause.

John T. Juricek is professor emeritus of history at Emory University and the author of Colonial Georgia and the Creeks: Anglo-Indian Diplomacy on the Southern Frontier, 1733-1763.

No one has a better understanding of the ins and outs of Creek politics than Juricek. . . . [His] two-part masterpiece should be read alongside historians who first defined the field of Native history in the colonial south.
--Itinerario

A much needed addition to this growing field. . . . Shed[s] light on this previously ignored subject, offering new insights, and opening the door to future research.
--Journal of American History

A well-written, clearly argued, and copiously documented discussion of diplomatic relations between the Creek confederacy, the British Empire, and the province of Georgia from the British victory in the Seven Years’ War through the opening stages of the American Revolution.
--H-Net

[A] richly detailed and nuanced account of British-Creek diplomacy between 1763 and 1776. . . . [and] an important study of Anglo-Creek diplomacy during a period that is often overlooked.
--Journal of Southern History

Juricek brings his years of expertise and research in the field to bear upon this substantial volume. . . . Scholars of the Native South, British-Native cross-cultural interactions, and the late colonial and revolutionary periods will find [his] work particularly engaging.
--William and Mary Quarterly