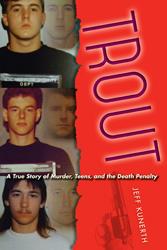 Trout
A True Story of Murder, Teens, and the Death Penalty

A haunting tale of teenage murderers, mistaken identity, and a brutal justice system

"In the tradition of Truman Capote 's In Cold Blood, Kunerth's Trout is seductive, repulsive, and compelling. I read it in one sitting. How fascinating is Trout? I begged my wife to read the first ten pages, and she, too, was hooked."--Gary R. Mormino, author of Land of Sunshine, State of Dreams: A Social History of Modern Florida

On a cool Pensacola night in January 1991, just a few minutes before midnight, three teenagers pulled up to the Trout Auto Parts store. Patrick Bonifay, his body coursing with adrenaline, entered the store clad in a ski mask carrying a loaded gun, intent on carrying out a poorly laid plan. Little did he know that it was his life--as well as the lives of his companions--that was about to be forever changed.
Bonifay, Clifford Barth, and Eddie Fordham were hired to kill Daniel Wells by Robin Archer, who blamed Wells for losing his job nine months prior. The plan was orchestrated by the then-twenty-seven-year-old Archer, who allegedly promised his seventeen-year-old nephew, Patrick, a suitcase full of money after the job was done. But Wells had called in sick that night, and an innocent man was covering his shift.
In this shocking and thought-provoking volume, Jeff Kunerth recounts the events of that fateful night, the swift investigation of the murder, the trials and sentencing of the teens, and their subsequent lives within the Florida court and penal systems. Kunerth uses the story of the Trout Auto Parts murder and the lives of these boys to explore varying aspects of troubled adolescence, impulsive actions lasting but moments, and the national trend of trying juveniles as adults in court.
They were boys every teenager can identify with and circumstances every parent fears. Their story provides a disturbing, sad, and compelling inside look at the dynamics of individuals--not yet adults, but no longer children--who commit senseless, impulsive crimes. Trout is that rare book that continues to haunt you long after you've finished reading it.

Jeff Kunerth is an award-winning journalist with the Orlando Sentinel. He is also the coauthor of Florida's Paved Bike Trails.

"True crime is chilling. Trout…is absolutely no exception."
--The Allure of Books blog

"An enticing and well-written text that keeps reader engaged throughout…openly discusses and encourages participation of the audience within the debate of juvenile justice system and the use of the death penalty and life sentences of juveniles."
--Southern Historian