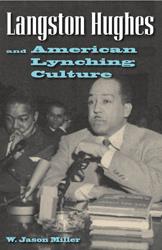 "A comprehensive study of the centrality of lynching to Hughes's artistic development, aesthetics, and activism. Scholars and general readers alike will find it a fascinating and indispensable addition to their understanding of the work of this brilliant poet."--Anne Rice, CUNY-Lehman College

Langston Hughes never knew of an America where lynching was absent from the cultural landscape. Jason Miller investigates the nearly three dozen poems written by Hughes on the subject of lynching to explore its varying effects on survivors, victims, and accomplices as they resisted, accepted, and executed this brutal form of sadistic torture.

Starting from Hughes's life as a teenager during the Red Summer of 1919 and moving through the civil rights movement that took place toward the end of Hughes's life, Miller initiates an important dialogue between America's neglected history of lynching and some of the world’s most significant poems.

This extended study of the centrality of these heinous acts to Hughes's artistic development, aesthetics, and activism represents a significant and long-overdue contribution to our understanding of the art and politics of Langston Hughes.

"Miller's ideas flow freely from the injustices of lynch mobs of the past to the legal lynching in courts of the present as he meticulously analyzes almost 40 of Hughes' poems. The reader will definitely gain further insights into and understanding of Hughes' poetry as well as the history of lynching, an understudied part of the U.S.'s dark past."
--CHOICE Magazine

"Miller invites readers to take a more acute journey than ever before through the racially charged writings of the incomparable Langston Hughes….a captivating study of cultural practice that haunted American society for decades and reveals a man who releaseed the painful feelings of his people through his brilliant writing." "Highly recommended."
--CHOICE

“Compelling and forward-looking…expand[s] our appreciation of how the wounds and scars of lynching have shaped our national conscience and identity.”
--Southern Literary Journal

“A tightly constructed study that draws on a range of fields… this highly readable book… deftly tracks the shifting meanings and uses of lynching through careful attention to Hughes’s extensive body of work.”
--College Literature

Origins of the Dream: Hughes's Poetry and King's Rhetoric