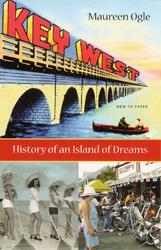 Key West:
History of an Island of Dreams

"Ogle captures this island city in all its quirky charm. Her story breezes along in typical Key West fashion--full of gossip and humor, with the jolt of a good cup of Cuban coffee."--Lee Irby, University of South Florida, St. Petersburg

Parrotheads, Hemingway aficionados, and sun worshipers view Key West as a tropical paradise, and scores of writers have set tales of mystery and romance on the island. The city's real story--told by Maureen Ogle in this lively and engaging illustrated account--is as fabulous as fiction. In the early 1800s, the city's pioneer founders battled Indians, pirates, and deadly disease and created wealth beyond their imaginations. In the two centuries since, Key West has nurtured tragedy and triumph and has stood at the crossroads of American history.

When Florida joined the Confederacy in 1861, Union troops seized control of strategically located Key West and city residents spent four years living under martial law. In the early 1890s, Key West Cubans helped Jose Marti launch the revolution that eventually ended Spain's control of their homeland. A few years later, the battleship Maine steamed out of Key West harbor on its last, tragic voyage. At the turn of the century, Henry Flagler astounded the entire country by building a technological marvel, an overseas railroad from mainland Florida to Key West, more than 100 miles long. In the 1920s and 1930s, painters, rumrunners, and writers (including Ernest Hemingway and Robert Frost) discovered Key West. During World War II, the federal government and the military war machine permanently altered the island's landscape. In the second half of the 20th century, bohemians, hippies, gays, and jet-setters began writing a new chapter in Key West's social history.

All of these personalities and events are wrapped in Ogle's unique and candid history of the island, an account that will fascinate past and present citizens of the Conch Republic, history buffs who like a well-told tale, and the millions of tourists from all over the world who love this colorful island city.

Maureen Ogle is retired from the University of South Alabama.

"Anyone who wants to know more about Key West than what appears in the typical guidebook will enjoy this spirited account." - Chicago Tribune
--Chicago Tribune

"It's a fascinating journey that Ogle lead us on and, like the actual Key West itself, it certainly deserves a visit." - Tampa Tribune
--Tampa Tribune

"Ogle serves up an engaging chronicle of Florida's most famous key for those who like a little history with their Cuban coffee - or whatever it is that would draw them to the "Island of Dreams." - Booklist
--Booklist

"Her coverage of the island's development and periodic destruction from hurricanes is interesting, but what's really fascinating is its literary gossip."
--St Pete Times

"This lively and engaging book is the first substantive account of the island, from the pirates who infested the Keys in the early 19th century to the battleship Maine's departure from Key West on its last, tragic voyage; from the arrival of artists and writers in the 1920s and 1930s to the invasion of hippies in the 1960s; from the growth of gay tourism in the 1970s to the Conch Republic escapade of the 1980s."
--Gainesville Sun

"Anyone who wants to know more about Key West than what appears in the typical guidebook will enjoy this spirited account."
--Akron - Beacon Journal

"Key West: History Of An Island of Dreams by Maureen Ogle is a scholarly and superbly presented study of the Key West Island of Florida, ranging from the era its colonization, to the repercussions of World War II, and down to the modern day." ; " Key West is an enthusiastically recommended addition to American History collections in general, and Florida History."
--Bookwatch

"Captures the spirit of the Conch Republic."
--Florida Historical Quarterly

"entertaining and comprehensive" "A history that is both thorough and compelling, and one which beckons the reader to experience Key West firsthand, with a copy of Key West: Island of Dreams tucked securely in a back pocket."
--Gulf South Historical Review

"Before you go, pick up a copy of Key West, and you will acquire enough knowledge to make your visit exciting and fun. Some of the most fascinating reading about the State of Florida is in books published by University Press of Florida… A must read for those who have already formed their own opinion of Key West, as well as for those who have never visited the captivating Florida Keys.
--Island Sun

"An interesting perspective on the island that served as a crossroad for international cultures, fostered an entrepreneurial spirit and has a long history of social progressiveness."
--TCPalm.com Travel