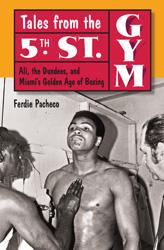 Tales from the 5th Street Gym
Ali, the Dundees, and Miami's Golden Age of Boxing