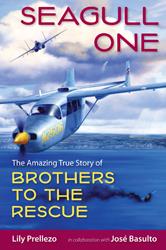 Seagull One:
The Amazing True Story of Brothers to the Rescue

"The true story of Brothers to the Rescue finally told in a compelling, riveting narrative that brings the reader inside the founding, growth, and tragic end of one of Florida's most important Cuban exile organizations."--Victor A. Triay, author of Fleeing Castro

"Finally we have the true story of Brothers to the Rescue, a group of dedicated volunteers who risked their lives in order to save that of others."--Eduardo Zayas-Bazán, author of ¡Arriba! and Bay of Pigs veteran

"Seagull One is the stirring account of an heroic group of pilots who risked their lives on a daily basis on behalf of the endless stream of Cuban rafters seeking freedom in the U.S. By turns heart-breaking, infuriating, and uplifting, Lily Prellezo’s debut is a wonderful testament to courage and compassion."--Les Sandiford, author of Last Train to Paradise

There was a time in Miami when it seemed impossible to go through a week without news coverage of the men, women and children escaping Cuba and being pulled off of makeshift rafts in the middle of the Florida Straits. One out of four did not survive the dangerous journey; the others barely hung on with little food and water. Most of the lucky ones were saved by a group of volunteers who called themselves Brothers to the Rescue (BTTR).

Seagull One is the never-before-told story of the men and women representing nineteen nationalities who came together to fly in rickety Cessnas over the Florida Straits to search for rafters fleeing Communist Cuba. It is a fascinating account of how José Basulto, a Cuban exile and Bay of Pigs veteran, founded BTTR with the humanitarian mission of saving the lives of the desperate souls willing to brave the ocean in pursuit of freedom. The group’s tactics were sometimes controversial, including protests against both the Cuban and U.S. governments, yet the organization managed to save over 4,200 people they would seldom, if ever, meet.

Seagull One also records the infiltration of two spies, one who was a double agent working for the FBI. Together these two volunteers collaborated with the Castro government in planning the shoot down over international waters of two unarmed Cessnas flying a humanitarian mission on February 24, 1996. The cold-blooded murder of four innocent men (three American citizens and one legal resident) led to significant changes in U.S.-Cuba relations.

Over one hundred people were interviewed for Seagull One. Their stories come to life in this nonfiction narrative that reads like a novel.

Lily Prellezo is an author living in Miami with her husband, Steve. José Basulto is a dreamer, patriot, and family man.