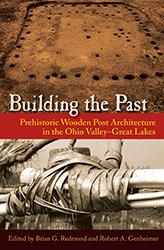 Building the Past:
Prehistoric Wooden Post Architecture in the Ohio Valley–Great Lakes