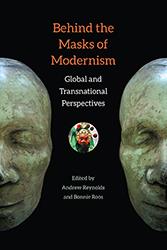 Behind the Masks of Modernism
Global and Transnational Perspectives

"Covering an impressive range of geographies, cultures, and time periods, these carefully researched essays explore the fascinating role of masks and masking in mediating the relationship between tradition and modernity in both art and literature."--Paul Jay, author of The Humanities "Crisis" and the Future of Literary Studies


Behind the Masks of Modernism reconsiders the meaning of "modernism" by taking an interdisciplinary approach and stretching beyond the Western modernist canon and the literary scope of the field. The essays in this diverse collection explore numerous regional, national, and transnational expressions of modernity through art, history, architecture, drama, literature, and cultural studies around the globe. Masks--both literal and metaphorical--play a role in each of these artistic ventures, from Brazilian music to Chinese film and Russian poetry to Nigerian masquerade performance.
The contributors show how artists and writers produce their works in moments of emerging modernity, aesthetic sensibility, and deep societal transformations caused by modern transnational forces. Using the mask as a thematic focus, the volume explores the dialogue created through regional modernisms, emphasizes the local in describing universal tropes of masks and masking, and challenges popular assumptions about what modernism looks like and what modernity is.

Rethink[s] the possibilities of continuity in modernism by breaking down the binaries of past and present because it investigates the masks that mediate between the outside and inside, instead of being seen as detachable artifacts that might be easily shaken off.
--Journal of Modern Literature