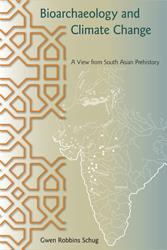 Bioarchaeology and Climate Change
A View from South Asian Prehistory

"Using subadult skeletons from the Deccan Chalcolithic period of Indian prehistory, along with archaeological and paleoclimate data, this volume makes an important contribution to understanding the effects of ecological change on demography and childhood growth during the second millennium B.C. in peninsular India."--Michael Pietrusewsky, University of Hawai‘i at Manoa

In the context of current debates about global warming, archaeology contributes important insights for understanding environmental changes in prehistory, and the consequences and responses of past populations to them.

In Indian archaeology, climate change and monsoon variability are often invoked to explain major demographic transitions, cultural changes, and migrations of prehistoric populations. During the late Holocene (1400-700 B.C.), agricultural communities flourished in a semiarid region of the Indian subcontinent, until they precipitously collapsed. Gwen Robbins Schug integrates the most recent paleoclimate reconstructions with an innovative analysis of skeletal remains from one of the last abandoned villages to provide a new interpretation of the archaeological record of this period.

Robbins Schug’s biocultural synthesis provides us with a new way of looking at the adaptive, social, and cultural transformations that took place in this region during the first and second millennia B.C. Her work clearly and compellingly usurps the climate change paradigm, demonstrating the complexity of human-environmental transformations. This original and significant contribution to bioarchaeological research and methodology enriches our understanding of both global climate change and South Asian prehistory.

Gwen Robbins Schug, associate professor of anthropology at Appalachian State University, is coeditor of A Companion to South Asia in the Past.