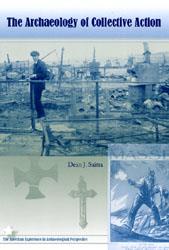 The Archaeology of Collective Action

"An important study that will change the way archaeologists think about the past and relate their findings to the society."--James Symonds, The University of Sheffield

"This book offers a unique perspective on the famous Colorado Coalfield Strike and War and shows how archaeology can engage and interact with both the present and the past."--Donald L. Hardesty, University of Nevada, Reno

Saitta examines historical archaeology's success in reconstructing collective social action in the past and considers the implications of these reconstructions for society today. Recognizing that studies of the past can serve different social interests, creating knowledge that can be used to oppress or emancipate elements of society, Saitta argues that historical archaeology needs to move beyond its emphasis on recovering the individual to acknowledging and asserting its power to effect social change.

Developing a theoretical and methodological approach to the archaeology of collective action, Saitta reviews some of the progress archaeologists have made in illuminating race-, gender-, and class-based forms of collective action in shaping the American experience. He then provides a case study illustrating the methods and insights archaeology brings to research on the Ludlow Massacre and the Colorado Coalfield Strike of 1913-14. Throughout, Saitta frames key issues and definitions in a clear, accessible style and offers compelling and persuasive arguments for the epistemological reorientation of the discipline of historical archaeology.

Notably, the book makes explicit the tie between the archaeological past and the political present. Excavations of the strikers' tent colony site at Ludlow, Colorado, provided novel insights into the survival tactics and resistance strategies of ordinary people locked in struggle with state and corporate power. The site became a powerful living memorial, resonating in contemporary labor struggles. Saitta's book will thus have special interest for the audience of scholars, students, and citizens who see archaeology as both a source of historical truth and a comment on the contemporary human condition.

Dean J. Saitta is professor of anthropology at the University of Denver.

…rigorous in its science, but politically engage.
--The Chronicle of Higher Education

"Saitta is to be commended for providing us with an interesting study."
--The Journal of the Royal Anthropological Institute

" Saitta's book provides an accessible grounding in archaeological theroy to explain the importance of realistic engagements with the material remains of historical events for understanding social processes. Students and teachers of labor history will appreciate this book for its straight forward writing and its inclusiveness. Archaeologists will appreciate its frank engagement of theoretical, empirical, and political issues. It shows that far from being an esoteric and remote suject, archaeology is not only relevant, it's important."
--Labor Studies Journal

"Saitta is able to reconstruct both the physical details and the social history of Ludlow."
--Journal of Middle Atlantic Archaeology

"A good example of a progressive trend called 'public anthropology,' through which scholars bring their research outside the academy."
--DISSENT