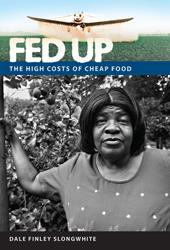 Fed Up
The High Costs of Cheap Food

"Slongwhite’s modern tragedy reflects the increasing power of the Big Food corporations’ influence in D.C.—and why something this unimaginable, passing from one generation to the next—can take place. Testimony like this belongs in the Federal Register. "--Theo Colborn, president, TEDX (The Endocrine Disruption Exchange)

"Poignant, gut-wrenching, and real, this book should be required reading for everyone who eats."--Barry Estabrook, author of Tomatoland: How Modern Industrial Agriculture Destroyed Our Most Alluring Fruit

"Presents compelling and heart-wrenching stories about profound social and environmental injustices. Yet these are also stories about strength, survival, and the victory of the human spirit. "--Joan Flocks, director, Social Policy Division at the Center for Governmental Responsibility, Levin College of Law, University of Florida


One farmworker tells of the soil that would “bite” him, but that was the chemicals burning his skin. Other laborers developed blindness, lupus, asthma, diabetes, kidney failure, or suffered myriad symptoms with no clear diagnosis. Some miscarried or had children with genetic defects while others developed cancer.

In Fed Up, Dale Slongwhite collects the nearly inconceivable and chilling oral histories of African American farmworkers whose lives, and those of their families, were forever altered by one of the most disturbing pesticide exposure incidents in United States’ history.

For decades, the farms around Lake Apopka, Florida’s third largest lake, were sprayed with chemicals ranging from the now-banned DDT to toxaphene. Among the most productive farmlands in America, the fields were repeatedly covered with organochlorine pesticides, also known as persistent organic pollutants. The once-clear waters of the lake turned pea green from decades of pesticide-related run-off. Research proved that birds, alligators, and fish were all harmed. And still the farmworkers planted, harvested, packed, and shipped produce all over the country, enduring scorching sun, snakes, rats, injuries, substandard housing, and low wages. All the while, endocrine-disruptor chemicals were dropped over their heads by crop dusters as they labored in the poison-saturated fields.

Eventually, state and federal dollars were allocated to buy out and close farms to attempt land restoration, water clean up, and wildlife protection. But the farmworkers became statistics--nameless casualties history almost forgot. Here are their stories, told in their own words.

“Dale Finley Slongwhite has faithfully recorded the lamentations of third- and fourth-generation African-American agricultural workers who labored in the area around Lake Apopka.”
--Florida Times-Union

The book is a must read for those interested in all aspects of the big picture of big farming. The collection of oral histories is haunting but must not be silenced.
--Orlando Sentinel

A white-hot take on the heart-wrenching saga of the Lake Apopka farmworkers and the poisoned fields in which they worked for decades.
--Orlando Weekly

An at once illuminating and heart-wrenching collection of ten oral histories. . . .Fed Up brings to light the suffering and marginalization too often experienced by those who harvest the nation’s produce.
--Environmental History