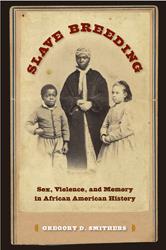 "A thought-provoking piece of scholarship that sheds light on the complex history of slave breeding in America. Smithers's book will be hotly debated in the profession."--Michael L. Ondaatje, University of Newcastle, Australia

"As engaging as it is compelling, bold, and captivating, Smithers's Slave Breeding pulls the reader through its pages with heart-wrenching exposition of the dark and ugly chapter of what could rightly be characterized as the sexual zeitgeist of American national history."--Tunde Adeleke, Iowa State University

For over two centuries, the topic of slave breeding has occupied a controversial place in the master narrative of American history. From nineteenth-century abolitionists to twentieth-century filmmakers and artists, Americans have debated whether slave owners deliberately and coercively manipulated the sexual practices and marital status of enslaved African Americans to reproduce new generations of slaves for profit.
In this bold and provocative book, historian Gregory Smithers investigates how African Americans have narrated, remembered, and represented slave-breeding practices. He argues that while social and economic historians have downplayed the significance of slave breeding, African Americans have refused to forget the violence and sexual coercion associated with the plantation South. By placing African American histories and memories of slave breeding within the larger context of America’s history of racial and gender discrimination, Smithers sheds much-needed light on African American collective memory, racialized perceptions of fragile black families, and the long history of racially motivated violence against men, women, and children of color.

Gregory D. Smithers teaches American history at the Virginia Commonwealth University. He is the author of Science, Sexuality, and Race in the United States and Australia, 1780s-1890s and coauthor of The Preacher and the Politician: Jeremiah Wright, Barack Obama and Race in America.

"Underscores the broad meaning of the continuing debates over sexual violence during and after slavery, the centrality of the African American family, and white hypocrisy."
--CHOICE

“Boldly and persuasively challenges received wisdom about the American narrative during the last two centuries.”
--Journal of Interdisciplinary History Vol. 44, no. 2

“A necessary contribution to the story of slavery’s brutality, a story that 150 years later still must be told.”
--Civil War News

“Makes a powerful case not just to reexamine sexual exploitation under slavery and the power of memory as a historical tool but also to interrogate accepted historical narratives when less established oral traditions tell a different story… Smither’s bold book lays down its own gauntlet.”
--Journal of American History

“A must-read for those interested in African American history, the history of slavery, and the complex issues of gender and sexuality.”
--Journal of American Ethnic History

Using various sources and methodologies, this study is truly interdisciplinary in nature. Through traditional historical examination of sources, as well as literary and film criticism and linguistic and feminist theoretical analyses, Smithers demonstrates a masterful understanding of the secondary literature on slavery and post-slavery African American life. . . . An important and significant contribution to slavery studies.
--Journal of African American History

The depth of scholarship in this book is remarkable; integrating an impressive array of historiography and a judicious use of primary sources, such as the WPA Slave Narratives, Smithers effectively weaves the story of slave breeding into American and African American history from the nineteenth century to the present.
--The Historian

literature of American slavery that will be of considerable interest to students of the antebellum South as well as historians of women, gender, the family, and sexuality.
--Register of the Kentucky Historical Society

Most Americans would agree that slavery existed, but they might have wildly different ideas about what slavery was like and what legacy it left. In Slave Breeding, Gregory D. Smithers exposes how these divergent views developed by tracing two historical threads: the vernacular history of a largely African American community and a professional history of primarily white, male historians.
--H-Net Reviews