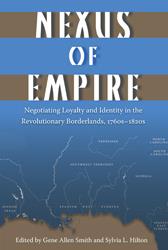 Nexus of Empire
Negotiating Loyalty and Identity in the Revolutionary Borderlands, 1760s–1820s

"Featuring compelling biographical essays on individuals from the key groups who experienced the rapid shifts in national boundaries in the Gulf region, this work opens an exciting new perspective on the problems of identity and loyalty in a transnational world."--Rafe Blaufarb, author of Bonapartists in the Borderlands

"A sparkling set of insightful essays that illuminates the interplay of natives, settlers, maroons, and slaves in a pivotal borderland contested by rival empires. Local, imperial, and racial identities overlapped in a shifting kaleidoscope of power, resistance, and adaptation."--Alan Taylor, author of The Divided Ground: Indians, Settlers, and the Northern Borderland of the American Revolution

"This expert handling of a crucial period that saw the emergence of the modern nation-states promises to become indispensable reading for specialists and students alike."--Serge Ricard, Emeritus, Sorbonne Nouvelle

"Clearly shows how the contest for empire across the Gulf Borderlands between 1763 and 1821 not only shifted international boundaries but also challenged the political loyalties and personal identities of this region’s multiethnic and multicultural inhabitants."--Steve Hackel, University of California, Riverside

Between 1760 and 1820, many groups in North America grappled with differences of identity, nationality, and loyalty tested by revolutionary challenges.

Nexus of Empire turns the focus on the people who inhabited one of the continent’s most dynamic borderlands--the Gulf of Mexico region--where nations and empires competed for increasingly important strategic and commercial advantages. The essays in this collection examine the personal experiences of men and women, Native Americans, European colonists, free people of color, and slaves, analyzing the ways in which these individuals defined and redefined themselves amid a world of competing loyalties.

This volume humanizes the promise and perils of living, working, and fighting in a region experiencing constant political upheaval and economic uncertainties. It offers intriguing glimpses into a fast-changing world in which individuals' attitudes and actions reveal the convoluted balancing acts of identities that characterized this population and this era.

Gene Allen Smith, professor of history and director of the Center for Texas Studies at Texas Christian University and curator of history at the Fort Worth Museum of Science and History, is coauthor of Filibusters and Expansionists. Sylvia L. Hilton is head of the Department of History of the Americas at the Complutense University of Madrid and coeditor of Frontiers and Boundaries in United States History.

"Procides a welcome reminder that things could have turned out differently than they did."
--Book News Inc.

"The Gulf South is a particularly fertile region for exploring identities and loyalties during this period. Four different empires-- including the United States--claimed political control over all or part of this area, creating a situation that enabled, indeed encouraged, individuals to embrace multifaceted identities and very flexible loyalties. Necessary reading for scholars of the early modern Gulf South and is also a valuable contribution to borderlands historiography and the larger literature on loyalties and identities during the Age of Revolutions. The significance of its topic and its broad scope will hopefully inspire further research on the individuals, groups, and issues included, and excluded, from its chapters."
--Southern Historian

"For readers interested in eighteenth-century Florida and borderlands in general, this collection of essays is a must-read."
--Florida Historical Quarterly

"A high degree of scholarship characterizes all chapters. Highly recommended."
--CHOICE, Vol. 48, No. 03

"The essays do an admirable job of wrestling with the slippery (and often difficult to define) concepts of loyalty and identity in the lives of their subjects." "The collection teems with trememdous insight into the lives of people wrestling with what it meant to be French, Spanish, Caddo, Greek, English, American, or none of these along the Gulf Coast during the Age of Revolution"
--Southwestern Historical Quarterly, vol. CXIV no.3

"Not only does the book devote attention to a locale and time traditionally overlooked but also does so through a fresh interpretative lens. The contributors should be applauded for unveiling new evidence and analysis that will benefit students of the topic in myriad ways."
--The Journal of Southern History, vol. LXXVII, No. 3

Historical Memoir of the War in West Florida and Louisiana in 1814–15 with an At: Expanded Edition