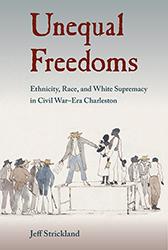 "Ambitious and convincing. This is the first examination of the role of European immigrants in the most southern of U.S. cities and the way that they and their ethnic children conformed to or dissented from the norms of the dominant white Southern culture."--Walter D. Kamphoefner, author of The Westfalians: From Germany to Missouri

"Demonstrates the importance of Charleston's Germans and their relationships with African Americans throughout these thirty turbulent years."--Dennis C. Rousey, author of Policing the Southern City: New Orleans, 1805-1889

"A provocative study that complicates and deepens our already extensive understanding of how both race and shifting ethnic identity shaped this important city in a critical era."--Bernard E. Powers, author of Black Charlestonians: A Social History, 1822-1885

During the latter half of the nineteenth century, the complex interplay of race, ethnicity, and class shaped the political economy and society of seaport cities from New Orleans to New York to Boston. Immigrants, African Americans, and native-born whites lived and worked together and nowhere was this level of interethnic relations so pronounced as in Charleston, South Carolina, the South’s most economically and politically significant city.

Jeff Strickland examines how German and Irish immigrants in Charleston were both agents of change during the transition from slavery to freedom, as well as embodiments of that change. As fears of strengthening antislavery sentiments took root in Charleston, racial tensions became ever more pronounced. Immigrant artisans and entrepreneurs occupied a middle tier in the racial and ethnic hierarchy, acting as a buffer between the disparate white southerners and African Americans. While relations between European immigrants and black southerners were often positive during the Civil War era, reconstruction brought new opportunities for upward socioeconomic mobility to Charleston's immigrants. By the end of the nineteenth century, German and Irish immigrants were easily able to cross the permeable white boundaries and, through their assimilation as white southerners, effectively embraced the ideals of white supremacy.

Using an innovative framework, Jeff Strickland adds much to our knowledge about the ways European immigrant communities functioned in the South during the nineteenth century, and the significance of his research extends far beyond the geographic south.

Shows clearly how various ethnic and racial groups were constantly being redefined during the later part of the 19th century. . . . Highly recommended.
--CHOICE

[This] well-researched study offers a valuable contribution to our understanding of the urban South’s racial and ethnic diversity in the mid- and late nineteenth century.
--Civil War Book Review

Provides the strongest evidence for rapidly changing ethnic and racial relations in Reconstruction...A detailed and complex story of racial and ethnic interaction.
--Journal of American History

A detailed examination of race and ethnicity in Charleston from 1850 to 1876 that contributes to our understanding of urban places in the South.
--American Historical Review

Offers a descriptive case study filled with well-written contextual overviews familiar to historians immersed in the study of slavery, the South, and antebellum immigration.
--Journal of American History

Stands as an exciting addition to historians’ understanding of race and ethnicity as well as the complexities of life in an antebellum southern city.
--Journal of Southern History

An important work. Strickland has exposed the shifts in race and ethnicity in one southern city by highlighting the tremendous power of divide and conquer techniques, greed, and caste formation.
--Journal of African American History