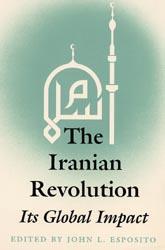 The Iranian Revolution
Its Global Impact

"A wonderfully concise yet complete survey of the background and status of Islamic revivalism in all of its various forms in each region."--SAIS Review
"A rich and thoughtful study of one of the most significant events of recent times."--School of Oriental and African Studies Bulletin

Marking the tenth anniversary of the Ayatollah Khomeini’s triumphant return to the Islamic Republic of Iran, 1989 proved a benchmark year in Iran’s history, with the condemnation of author Salman Rushdie to execution, the denunciation or Iranian liberals and the West, the removal of Khomeini’s chosen successor, and the death of Khomeini himself.

John L. Esposito introduces The Iranian Revolution with an explanation of why the present is a turning point for Iran. He isolates the export of Islamic revolution as central to the Republic’s character. A concise description of the complexities of that issue is followed by a discussion of its effects within and outside Iran, with the majority of the collection then devoted to insightful analyses of the Republic’s impact throughout the Islamic world.

International experts from Iran, Europe, Africa, and the United States assess worldwide impact of the Iranian Revolution on other Muslim societies and give us a remarkable analysis of the status of Islamic revivalism in a far-flung array of Islamic statues and societies—Lebanon, Bahrain, Egypt, Tunisia, Nigeria, Turkey, the USSR, the Philippines, Malaysia, Indonesia, and Iraq.

The book owes its quality not only to the currency of its subject matter but also to its distinguished contributors, who address such issues as the failure of the Iranian revolution to replicate itself in other countries and the extent to which Iran’s experience has shaped the politics, economics, and cultures of other countries.

Sponsors of the book and of the 1989 conference that inspired it are the Middle East Institute, the Johns Hopkins School of Advanced International Studies, and Royal Institute of International Affairs.

This objective and thought-provoking assessment of the Islamic Republic of Iran’s success to date in implementing its objectives, as well as its prospects for the future, makes timely reading for anyone seeking an understanding of the revolution’s impact.

John L. Esposito is director of the Center for International Studies and professor of religious studies at the College of the Holy Cross.

Daughters of Abraham: Feminist Thought in Judaism, Christianity, and Islam