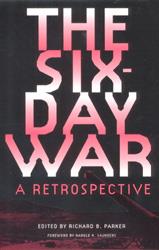 The Six-Day War: A Retrospective

Edited by Richard B. Parker

"Brings the subject alive in the same multifaceted way that the real-life crisis was lived. . . . It probably will not be possible again to assemble this many individuals who were in policy-making positions during the 1967 war. The interaction among them is invaluable. . . . Only a book of this kind . . . could convey that sense of partial knowledge, sharply conflicting perspectives, irrational actions, divided governments, even the closest friends not understanding each other."--Harold H. Saunders (National Security Council staff member at the White House during the Six-Day War), Kettering Foundation

Former Ambassador Richard B. Parker gathered representatives from the Israeli, Arab, Russian, and U.S. military, government, and academe, many of whom were participants in the 1967 crisis, to reexamine the steps and missteps that led to the conflict. Developed from a State Department conference marking the 25th anniversary of the war, this analysis and discussion provide the most authoritative account we have of the genesis of the Arab-Israeli war.


Richard B. Parker, U.S. ambassador to Algeria, Lebanon, and Morocco from 1974 to 1979, retired from the Foreign Service in 1980. He is the author of The Politics of Miscalculation in the Middle East and North Africa: Regional Tensions and Strategic Concerns, and he edited the Middle East Journal from 1981 to 1987.

"any reader of this book will come away with a much clearer understanding of how a crisis that no one seems to have wanted led to a war that radically changed the Middle East."
--Foreign Affairs

"Parker's edited volume is quite useful and futher efforts of this kind should be encouraged. Conferences and interviews with actual participants, when coombined with more traditional research, may provide a better account of an event than primary and secondary source research alone."
--International Politics - The Netherlands

"While it may be that 'it is natural for those involved in an action (or inaction) to see, in the hindsight of a quarter-century, little else that they could have done' (p. 77), the work's contributors agree that misperceptions and miscalculations among the major actors contributed significantly to the outbreak of the war. The Six-Day War draws on the insights of high-ranking 1967 policy makers to provide an invaluable examination of how domestic policy processes, motivations, and pressures contributed to this watershed event in the history of Middle Eastern politics."
--Middle East Journal

"not only contains a wealth of prevoiusly unpublished anecdotal detail, but also significant testimony and evidence bearing on still controversial aspects of the June war, such as a possible motivation for the attack by Israeli aircraft and torpedo boats on the USS Liberty in which 34 U.S. Naval and National Security Agency personnel were killed and 171 wounded." "The book is neither the shortest nor the simplest recitation available of the known facts concerning the outbreak of the Six-Day waf of June, 1967. But it will prove fascinating and useful to scholars and specialists, not only for the many new opinions entered into the historical record for the first time, but also for its illustrations of how differently 'men of affairs' who actually participate in making events happen, and scholars and historians who assess them, may interpret the same sets of facts."
--Arab Studies Quarterly