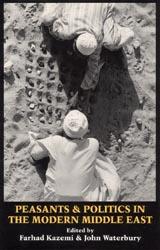 Peasants and Politics in the Modern Middle East

"These essays are of uniformly high quality, scholarly in tone, while addressing concerns of utmost importance for an understanding of Middle East politics. [The editors] provide an excellent overview . . . and there-after the reader is treated to historical and comparative studies that are very informative. A first-rate collection."--Foreign Affairs

Contents
1. Peasants Defy Categorization (As Well as Landlords and the State), by John Waterbury
2. Changing Patterns of Peasant Protest in the Middle East, 1750-1950, by Edmund Burke III
3. Rural Unrest in the Ottoman Empire, 1830-1914, by Donald Quataert
4. Violence in Rural Syria in the 1880s and 1890s: State Centralization, Rural Integration, and the World Market, by Linda Schatkowski Schilcher
5. The Impact of Peasant Resistance on Nineteenth-Century Mount Lebanon, by Axel Havemann
6. Peasant Uprisings in Twentieth-Century Iran, Iraq, and Turkey, by Farhad Kazemi
7. War, State Economic Policies, and Resistance by Agricultural Producers in Turkey, 1939-1945, by Sevket Pamuk
8. Rural Change and Peasant Destitution: Contributing Causes to the Arab Revolt in Palestine, 1936-1939, by Kenneth W. Stein
9. Colonization and Resistance: The Egyptian Peasant Rebellion, 1919, by Reinhard C. Schulze
10. The Ignorance and Inscrutability of the Egyptian Peasantry, by Nathan Brown
11. The Representation of Rural Violence in Writings on Political Development in Nasserist Egypt, by Timothy Mitchell
12. Clan and Class in Two Arab Villages, by Nicholas S. Hopkins
13. State and Agrarian Relations Before and After the Iranian Revolution, 1960-1990, by Ahmad Ashraf
14. Peasant Protest and Resistance in Rural Iranian Azerbaijan, by Fereydoun Safizadeh