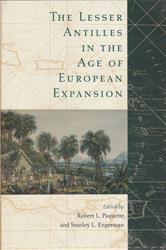 The Lesser Antilles in the Age of European Expansion

"This superior set of splendidly edited and introduced essays is interdisciplinary, cross-cultural history at its best. Although intellectually sophisticated and focused on difficult problems, the essays are clearly written, free of jargon, and accessible to students and general readers as well as invaluable for specialists."--Eugene D. Genovese


This collection offers the only single-volume treatment in English of the Lesser Antilles from the time of Columbus to the abolition of slavery. The essays show how the Lesser Antilles emerged in the 17th and 18th centuries as among the most densely populated and advanced economic zones in the world and how they served as stepping-stones for the expansion of the slave-based plantation system in the Americas.

Part I: Europe and Indigenous Peoples

1. Columbus Was a Cannibal: Myth and the First Encounters, by William F. Keegan

3. After the Encounter: Disease and Demographics in the Lesser Antilles, by Kenneth F. Kiple and Kriemhild C. Ornelas

4. The Black Caribs of St. Vincent: A Reevaluation, by Michael Craton

6. Redcoats and Slaves in the British Caribbean, by Andrew O'Shaughnessy

7. Crisscrossing Empires: Ships, Sailors, and Resistance in the Lesser Antilles in the Eighteenth Century, by Julius S. Scott

9. Opportunity and Mobility in Early Barbados, by Alison F. Games

10. The British Transatlantic Slave Trade before 1714: Annual Estimates of Volume and Direction, by David Eltis

12. Citizens of St. Eustatius, 1781: A Historical and Archaeological Study, by Norman F. Barka

15. The Slaves and Free Coloreds of Martinique during the Age of the French and Haitian Revolutions: Three Moments of Resistance, by David Geggus
Part V. Abolition and Emancipation

16. Beyond and Below the Merivale Paradigm: Dominica's First 100 Days of Freedom, by Michel-Rolph Trouillot

17. "Birth-Pangs of a New Order": Special Magistrate John Anderson and the Apprenticeship in St. Vincent, by Roderick A. McDonald

18. The Long Good-bye: Dutch Capitalism and Antislavery in Comparative Perspective, by Seymour Drescher


Robert L. Paquette is Publius Virgilius Rogers Professor of American History at Hamilton College in Clinton, New York. He is the author of Sugar Is Made with Blood: The Conspiracy of La Escalera and the Conflict between Empires over Slavery in Cuba, which won the Elsa Goveia Prize in Caribbean history. Stanley L. Engerman is John H. Munro Professor of Economics and professor of history at the University of Rochester. Among the many books he has coauthored or coedited are Time on the Cross: The Economics of American Negro Slavery, which won the Bancroft Prize, and British Capitalism and Caribbean Slavery.

"although the Lesser Antilles are modest in size --an arch of small islands in the eastern Caribbean, from the Virgin Islands, Barbados, Trinidad, and Tobago to the Dutch colonies of Bonaire, Curacao, and Aruba-- their importance in world history was quite disproportionate, during the formative phases of the Atlantic trading system that flourished during the eighteenth century. Hence, the volume is a new contribution to one of the most enduring and tantalizing issues in modern history, often discussed under the rubric of the 'Williams thesis': What were the links, if any, between the African slave trade, the plantation complex, and European economic development?" "Although is is surely too simple to isolate slavery as the 'cause' of European expansion --as if African slavery were exogenous to the expansion itself-- nonetheless, these studies and others of the past decade leave little doubt that slave-based commerce was a vital and integral part of England's asendancy on the international scene."
--Journal of Interdisciplinary History

"What become clear in this absorbing volume is that the Lesser Antilles was far from being a backwater in this period but was a vital cog in an increasingly connected world economy. . . . Experts in Caribbean history will find this bokk indispensable. Specialists in the American South and in the histories of contact between Europeans and indigenes; slavery and the plantation economy; and the process of slave emancipation throughout the Americas will also find much in this book that will provoke comparative research." -- Journal of Southwest Georgia History
--Journal of Southwest Georgia History

"A wealth of material to enrich and to challenge existing knowledge."
--Journal of Social History

"A refreshingly diverse series of articles covering the period of European and African contact with the indigenous peoples of the Leeward and Windward Islands, through to the emergence of an independent post-emancipation peasantry." -- New West Indian Guide
--New West Indian Guide/Neuwe West-Indische Gids

"A major addition to the historical literature on the Caribbean and the Americas in general. Its effect is to redress the historiographical balance which has generally been weighted in favour of the Greater Antilles. The long-term effect of this wide-ranging volume, one hopes, will be to attract scholars to undertake research in a still relatively underdeveloped field of study." -Slavery and Abolition
--Slavery and Abolition