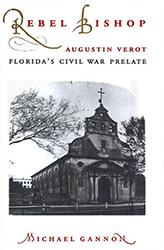 
"Definitive, sprightly, well-written, and scholarly. . . . The author has succeeded in bringing the most famous Catholic cleric of the Confederacy to life."--Florida Historical Quarterly

"Here is a vibrant and unconventional bishop with arresting things to say on issues that are still alive in the American Church. . . . He has had the good fortune to have as his biographer a man who is at the same time a careful scholar and a writer with a keen sensitivity for the English language."--Commonweal

"Rebel Bishop is a welcome contribution to the history of Catholicism in the South."— Journal of Southern History

First published in 1964, Rebel Bishop, by award-winning historian Michael Gannon, is the biography of a passionately outspoken and controversial figure—a man who found himself at the intersection of three fascinating histories: that of a nation torn by Civil War, that of the Catholic Church during the First Vatican Council, and that of Florida in the mid-1800s.
Augustin Verot was the Church’s enfant terrible, a man as contradictory as he was controversial. As the Church’s first prelate in Florida (1858-1876), he preached vehemently against the abuse of individual slaves and on behalf of slave rights but was nevertheless determined to use Church teachings and his pulpit to defend slavery as an institution. A vocal champion of the Rebels’ cause against the Yankees, he nevertheless took his priests, in the winter of 1863, to the notorious prison camp at Andersonville, Georgia, to treat the tens of thousands of Union soldiers held there.
In this lively biography, Gannon also explores Verot’s memorable participation in debates of the First Vatican Council, where he was known for his trenchant interventions. Singularly, Verot argued in vain for the vindication of Galileo (who was condemned by the Church in the 17th century) and for more liberal attitudes toward scientific progress generally. He was, moreover, staunchly opposed to the newly proposed doctrine of papal infallibility, and urged ecumenical reconciliations with Protestant Christians.
Now available for the first time in paperback, Rebel Bishop is the clear-eyed and compelling story of Augustin Verot and his impact at a critical juncture of the histories of Florida, the Catholic Church, and the Civil War.

"Thorough and well documented. . . . it provides a detailed study of both the bishop and his faith in the mid-1800s, as the author considers Verot's place within the wider scope of American Catholicism. The chapter on Verot's wartime work and especially the section on his missionaries who braved the horrors of Andersonville is riveting." -- Civil War History
--Civil War History