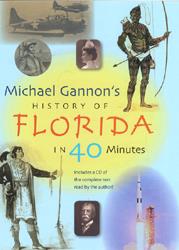 "Michael Gannon, a towering figure in Florida history, richly deserves his reputation as the 'dean of Florida studies.’"--Gary Mormino, author of Land of Sunshine, State of Dreams

"One of the state's foremost historians."--Miami Herald

"Mike Gannon [is] one of Florida's gifted historians and authors."--Gulf Coast Historical Review

"Gannon is a lifelong student of the history of his state, an acclaimed teacher, a masterful and tireless raconteur, and a superb stylist."--Paul S. George, Florida Historical Quarterly

In this creative and engaging project, the author of the widely popular Florida: A Short History, offers a brief, stirring invitation to the state’s history in both audio and print formats. Gannon, a longtime researcher and teacher, packs thousands of years of history and change into a concise, authoritative 40-minute cruise through Florida’s centuries.

Spanning millennia from Florida’s earliest inhabitants to the 2004-5 hurricane seasons, Gannon highlights ten watershed periods in the state’s history. Appropriately, in a state widely known as a cultural melting pot, the first four of those periods, covering nearly 12,000 years, were shaped by a different dominant population and culture: the original inhabitants; Spanish settlers and missionaries; British colonists; and the Spanish restoration and American territorial populations. Political and social strife dominated the next two periods, early statehood, and Civil War and Reconstruction. Then, beginning near the turn of the last century, themes that have driven the emergence of the megastate—innovation, investment, and technology—came to characterize the final four periods: the Flagler era; the land boom; the Second World War; and finally, the age of air conditioning, mosquito control, and VA home loans.

From the Timucua to Disney, Spanish explorers to Canadian tourists, and indigo plantations to sun-drenched beaches, Gannon recalls the people, places, and key events shaping the longest recorded history of any of the American states. Presented in a personable, conversational style for all readers and listeners, Florida in Forty Minutes is entertaining history, suitable for classroom use or as a gift for anyone who loves, or ought to know more about, Florida history.

Michael Gannon is distinguished service professor emeritus of history at the University of Florida.

Forty minutes for a history spanning 450 years might not seem like much, but Michael Gannon has proven that 40 minutes is enough time to teach almost anyone the basic facts of Florida history.
--Florida Times-Union

Florida: A Short History, Revised Edition
The History and Antiquities of the City of St. Augustine, Florida
The History of Florida
The Cross in the Sand: The Early Catholic Church in Florida, 1513-1870
Rebel Bishop: Augustin Verot, Florida’s Civil War Prelate