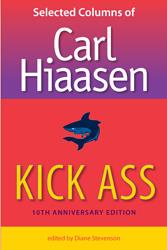 "Carl Hiaasen is one of America's finest novelists. His newspaper column is another side of the same talent, examining with a corrosive writer's eye the outrageous carnival of Southern Florida. The inhabitants are all here: thieves, conmen, and hustlers, perfumed swine and oiled mannequins, legal swindlers and patriotic crooks, executioners and lap dancers, and yes, even an occasional hero. This is a splendid collection by a native son whose rage at the despoiling of Florida can only be relieved by dark laughter."--Pete Hamill

Readers who eagerly anticipate each new Carl Hiaasen novel will relish this selection of his Miami Herald columns, written with the same dark humor and satirical edge as Tourist Season, Strip Tease, Stormy Weather, and the rest of Hiaasen’s brilliant and nationally acclaimed fiction. Known for evoking the disastrously flawed paradise of modern South Florida, Hiaasen proves in these columns that facts can indeed be stranger than the fiction they inspire.
Beginning with "Welcome to South Florida," a chapter introducing such everyday events as animal sacrifice, riots at the beach, and a shootout over limes at the supermarket, this collection organizes over 200 columns into 18 chapters, chronicling the events and defining the issues that have kept the South Florida melting pot bubbling throughout the ‘80s and ‘90s. An introductory essay provides an overview of Hiaasen’s career and outlines his principal concerns as a journalist.
Since its inception in 1985, Hiaasen’s twice-weekly "baseball-bat-to-the-forehead" column has become enormously popular for its passionate conviction and willingness to confront powerful interests in pursuit of the public good. Amid the corruption and chaos of a city on the edge, Hiaasen’s pointblank honesty and clear articulation of what’s right have secured him wide respect across the community’s many racial and ethnic divides as well as the admiration of his peers, who compare him to A. J. Leibling, I. F. Stone, and H. L. Mencken.
In addition to South Florida color and world-class journalism, readers of Kick Ass will find one of Florida’s staunchest defenders in action, and they’ll take great pleasure in watching him work.


Bestselling author Carl Hiaasen has written Tourist Season, Strip Tease, Sick Puppy, Skinny Dip, and many other novels that have helped define Florida noir. He is also the author of three popular books for young readers, Hoot, Flush, and most recently, Scat. His nonfiction includes Team Rodent: How Disney Devours the World and Downhill Lie: A Hacker's Return to a Ruinous Sport. A Florida native and lifelong resident, Hiaasen still writes regularly for the Miami Herald, where he has worked for 33 years and where these columns first appeared. Diane Stevenson teaches research writing in the psychology department at the University of Florida.

"For fans of the novels, it's a delight. . . , [b]ut the book is not just for Hiaasen's fans. Readers who have never cracked the covers of his novels can find much here to enjoy: Hiaasen cares deeply about Florida, cheers when something good happens, and gets riled when somebody does something dumb; readers interested in the Sunshine State will learn more from this book than from a stack of travel guides. Reminiscent of the snarky, opinionated newspaper articles of the great Mark Twain, Hiaasen's columns are finely crafted little gems."--Booklist
--Booklist

"Want to know what to wear, eat and drink at a crime scene? Where to buy a voodoo doll for five smackers? Where real estate is sold by the quart? Where the trunks of rental cars should be checked for dead bodies? Where machine guns lend 'spice and spontaneity' to otherwise dull street scenes? Welcome to Carl Hiaasen's latest book, entitled Kick Ass.
--Gainesville Sun

"A particularly valuable resource for Hiaasen's fans outside of South Florida, many of whom are avid about his novels. . . . Now, for the first time, those readers will have easy access to Hiaasen's other side."-- Miami Herald
--Miami Herald

"News for the die-hard fan: Hiaasen opens up a can of whoop ass in this month's release, Kick Ass.-- BookPage
--Book Page

"This compendium of Miami Herald columns by best-selling novelist Carl Hiaasen (Lucky You, 1997, etc.) reveals an angry, alert civic muckraker in the pugilistic vein of Mencken or Royko. . . . Such columns, like his fiction, reveal Hiaasen as a crystalline, pitiless seer of human weakness in much the same vein as his Florida forebears, Charles Willeford and Harry Crews. Deeply satisfying, both for what it reveals of the serious priorities of a supposedly light novelist and for the outrageous epic of Florida profiteering and entropy within."-- Kirkus Reviews
--Kirkus Reviews

"It has been noted that, were H. L. Mencken writing today, no newspaper would print him. Still, that Hiaasen and a few others if not like him, at least in his league -- Maureen Dowd, say, and Molly Ivins -- appear regularly proves that kick-ass journalism still lives and breathes fire. And sells newspapers by the truckload."-- San Diego Union-Tribune
--San Diego Union-Tribune

"Here is the columnist at the peak of his powers, skewering the greedy, the corrupt, the polluters, the lazy, the clueless, and other miscreants found abundantly in Florida. It takes a certain amount of background knowledge and political awareness to fully appreciate all the references, but just about anyone who pays attention to events in Florida will find this book a joy to read."-- Stuart News
--Stuart News

"Carl Hiaasen has always said that if he isn't making people mad, he isn't doing his job. Give this man a raise, because he does a great job. . . . He might get you so mad you'll get out of your chair and do something to stop the ecological and ethical erosion of the Sunshine State. . . . Unlike his novels, where the weirdnesses are products of imagination, all the stuff in Kick Ass actually happened. This is real; this is journalism."-- Orlando Sentinel
--Orlando Sentinel

"Whether he's lampooning indicted officials, rogue cops or The Mouse, Hiaasen's writing is as direct and unforgiving as a sawed-off shotgun. . . . Kick-ass writing, delivered with a laugh. You can't ask for much more than that."-- Tallahassee Democrat
--Tallahassee Democrat

"Yes, you can safely deduce that Hiaasen makes some people angry. You can also figure that he's doing exactly what he ought to be doing, mixing little blasts of honesty, humor and rage and putting it to us. He does it really well, too."-- Columbia State
--Columbia State (SC)

""Kick Ass offers 200-plus examples of his hard-eyed, often hilarious critiques of the real crime, corruption and lunacy in his home state. In fact, it shows you that Hiaasen's seemingly implausible fictional premises aren't really far-fetched at all. He just knows Florida."-- Playboy
--Playboy

Even for those who aren't familiar with, or particularly interested in Florida's woes, Hiaasen is a great read, if only for his biting satire. . . . Thank God for newspaper columnists like Hiaasen."-- Creative Loafing
--Creative Loafing (Charlotte, NC)

"Inside Florida, Hiaasen fans also have known him as a ferociously witty columnist for the Miami Herald since the mid-eighties. The columns collected in Kick Ass cover that decade and a half, leaving a trail of blood from Hiaasen's barracuda-like attacks on the spoilers of South Florida. Though they are entertaining, urban dwellers everywhere should read them as more than entertainment; they probably foretell many of the painful issues that await other overcrowded areas of America. Miami, like Los Angeles, is one of the nation's polyglot signposts (dented by bullets) into the twenty-first century."-- The Nation
--Nation

"Sick Puppy will probably stay on the bestseller list for weeks, but it's the columns that demonstrate a career of solid reporting and legwork. . . . As successful as he's become as a novelist, Hiaasen clearly feels a moral calling to his role as columnist. He says in big letters on the back cover of Kick Ass, 'It's the old school of slash-and-burn metropolitan writing. You just kick ass.'"-- Boston Phoenix
--Boston Phoenix