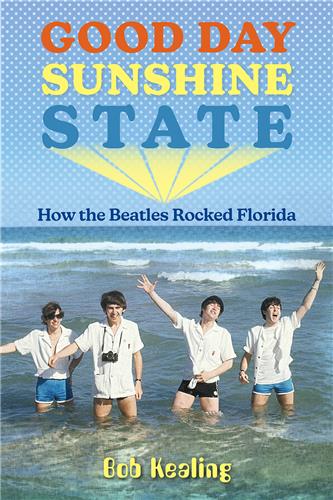 
The musical and cultural impact of the Fab Four in Florida

“With lively prose and rich details, Kealing transports us back to the Beatles’ Florida sojourn in 1964. Eyewitness accounts from behind-the-scenes folks—fans, reporters, photographers, tour personnel, police officers—and words from the Fab Four themselves add depth to this intriguing look at a band on the precipice of transforming rock and roll forever.”—Holly George-Warren, author of Janis: Her Life and Music

“Good Day Sunshine State is a remarkable achievement, and Kealing’s passion for research and storytelling is evident on every page. A unique and mesmerizing book that will captivate Beatles fans as well as lovers of history.”—Gilbert King, Pulitzer Prize winning author of Devil in the Grove: Thurgood Marshall, the Groveland Boys, and the Dawn of a New America

“Florida has a very deep, yet sorely underappreciated, music history, and no one understands this better than Bob Kealing. Good Day Sunshine State is an impeccably researched, culturally significant book written with the flair of a true storyteller. This is a must-read for any Beatles fan and anyone curious about the history of Florida.”—Jeff Nolan, music and memorabilia historian

“A brilliant recounting of Florida (and America in the early 1960s) through the lens of the Beatles. Kealing has a firm grasp on rock and roll and Florida, weaving the two subjects seamlessly through politics, local and national events, and cultural change.”—Gary R. Mormino, author of Dreams in the New Century: Instant Cities, Shattered Hopes, and Florida’s Turning Point

In 1964, Beatlemania flooded the United States. The Beatles appeared live on the Ed Sullivan Show and embarked on their first tour of North America—and they spent more time in Florida than anywhere else. Good Day Sunshine State dives into this momentous time and place, exploring the band’s seismic influence on the people and culture of the state.

Bob Kealing sets the historical stage for the band’s arrival—a nation dazed after the assassination of John F. Kennedy and on the precipice of the Vietnam War; a heavily segregated, conservative South; and in Florida, recent events that included the Cuban Missile Crisis and the arrest and imprisonment of Martin Luther King Jr. in St. Augustine. Kealing documents the culture clashes and unexpected affinities that emerged as the British rockers drew crowds, grew from fluff story to the subject of continual news coverage, and basked in the devotion of a young and idealistic generation.

Through an abundance of letters, memorabilia, and interviews with journalists, fellow musicians, and fans, Kealing takes readers behind the scenes into the Beatles’ time in locations such as Miami Beach, where they wrote new songs and met Muhammad Ali. In the tropical environs of Key West, John Lennon and Paul McCartney experienced milestone moments in their friendship. And the band dodged the path of Hurricane Dora to play at the Gator Bowl in Jacksonville, where they famously refused to perform until the city agreed to integrate the audience.

Kealing highlights the hopeful futures that the Beatles helped inspire, including stories of iconic rock-and-rollers such as Tom Petty who followed the band’s lead in their own paths to stardom. This book offers a close look at an important part of the musical and cultural revolution that helped make the Fab Four a worldwide phenomenon.

Bob Kealing is a retired broadcast journalist based in Orlando. During his thirty-year career, he received six Emmy awards and was a two-time recipient of the Edward R. Murrow award. His many books include Calling Me Home: Gram Parsons and the Roots of Country Rock and Elvis Ignited: The Rise of an Icon in Florida.

Calling Me Home: Gram Parsons and the Roots of Country Rock
Elvis Ignited: The Rise of an Icon in Florida