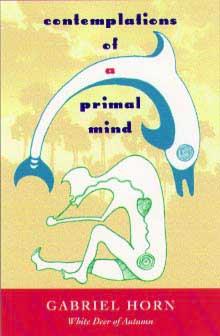 "Horn's moving essays afford a window on the way Native American spirituality looks as it is lived. A generous, searching writer, Horn never descends to polemic to make his nonetheless sharp points about the submersion of native or 'primal' values in ones called civilized. . . . Horn poignantly shows . . . how difficult but rewarding it is to live, moment by shining moment, in a primal relationship to the world."--Booklist

"A haunting, mournful cry, much like a loon's call across a lake in the deep night. . . . [Gabriel Horn] is insightful and eloquent in ways that sometimes seem limited to the Indian and the Irish."--Tampa Tribune

"No matter that there is an underlying angst in these essays, the flow of language is so smooth that the reader is immediately caught up in the words and the gradually evolving ideas."--St. Petersburg Times

"Some sections [of Contemplations] are too appealing to resist reading a second time."—American Indian Library Journal


Echoing the ancient sounds of the Native American oral tradition, wisdom keeper Gabriel Horn (White Deer of Autumn) writes in praise of the primal mind. With a profound affinity for Florida’s beauty, Horn shares the wisdom he has learned from dolphins in the Florida Keys. He describes his wonder at the splendor of the natural world and his respect for the spirits of the supernatural realms and the Star People of our possible future who inhabit those realms in ancient stories.
Sometimes angry, always generous, he implores the reader to contemplate modern society's rejection of the sacred and to seek a deeper understanding of the interconnectedness of all life. His search for dignity, while grappling with the complexities of contemporary life, lifts his story from personal memoir to universal truth.


Gabriel Horn is the author of numerous books, including The Book of Ceremonies, Native Heart: An American Indian Odyssey, and Ceremony in the Circle of Life, a children's book that has received the National Council of Social Studies Teachers Notable Children’s Trade Award. One of the original American Indian Movement (AIM) teachers who helped establish the AIM Survival Schools in the 1970s, he lectures nationwide on writing and the environment. He lives on the Gulf Coast of Florida.

"Contemplations is a conscious work in which Horn offers a language of mystery. By giving us an introduction to this way fo experiencing life, he helps us to begin to consider the possibilities of wholeness and connection in an culture plagued by violence and alienation." -Forum
--Forum