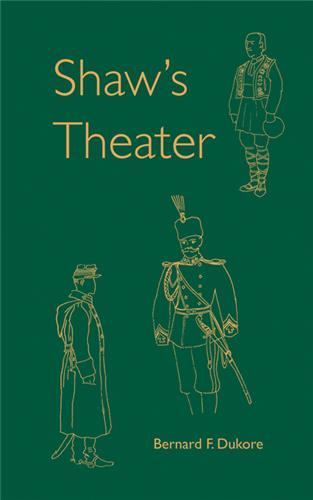 "The result of nearly three decades of first-rate thought, research, and execution . . . both original and significant. Shaw’s Theater is doubly welcome for making ‘Bernard Shaw, Director’ readily available and for providing Dukore’s later insights on how Shaw’s sense of practical theater influenced his writing for the stage."--Fred Crawford, Central Michigan University

"As a teacher, I would have two copies at the reserve desk and recommend it to students really interested in drama."--Daniel
Leary, City College, City University of New York


One of the preeminent Shaw scholars in the United States, Bernard F. Dukore examines Shaw’s work in the theater and his use of the theater in his work. The book has three parts that deal with different aspects of these related subjects.
Part I, "Bernard Shaw, Director," was published to great acclaim in 1971 and, though out of print, remains the most authoritative work on this aspect of Shaw. Citations have been updated and recent critical analysis has been included, making its reappearance an invaluable event for serious scholars.
The second part, "The Director as Interpreter: Shaw's Pygmalion," investigates the playwright's view of the director's role of interpreting a play for theatrical production. Focusing intensely on one of Shaw's most popular comedies, it treats not only his direction of Pygmalion but also the way his work as director found its way into his revised published editions of the text.
The final part, "The Theater in Bernard Shaw's Drama," treats a previously unexplored aspect of Shaw's plays, wherein the theater itself performs a larger role than is usually recognized. Here Dukore explains how various works call attention to elements of the theater itself, including the audience in the playhouse, characters directing other characters, plays within plays, backstage preparations, critics, and dramatists, among whom is Shaw himself.
While Shaw's drama is frequently studied, his drama in the
context of his own theater practice is not. This important book should interest scholars as well as theater professionals and lovers of the dramatic arts.

Bernard F. Dukore is University Distinguished Professor of Theatre Arts and Humanities Emeritus, Virginia Polytechnic
Institute and State University. He is the author or editor of more than thirty books, many of them on Shaw, most recently Bernard Shaw on Cinema.

"With Shaw's Theater, Bernard Dukore adds to his distinguished body of Shaw scholarship a work that Florida Shaw Series editor R F Dietrich, in his foreword, rightly calls 'as complete and expert an account of Shaw's directorial interpretative, and creative uses of the theater as we are likely to get for some time.' Shaw's Theater is essential reading for Shavians, directors, theater historians, and anyone wishing a glimpse of Bernard Shaw's behind the scenes struggle to make the audience believe that real things are happening to real people on stage." - English Literature in Transition 1880 - 1920
--English Literature in Transition

"As complete and expert an account of Shaw's directorial, interpretative, and creative uses of the theater as we are likely to get for some time… essential reading for Shavians, directors, theater historians, and anyone wishing a glimpse of Bernard Shaw's behind-the-scenes struggle to make the audience believe that real things are happening to real people on stage."
--English Literary Transitions