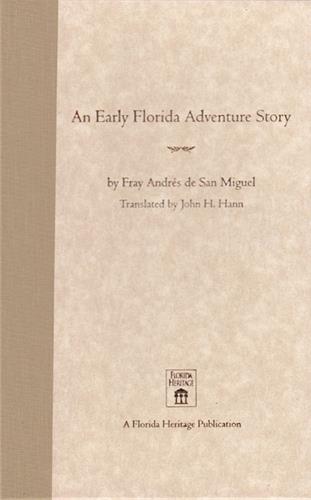 "This book belongs in the library of anyone with an interest in the Spanish period in Georgia and Florida, both as a reference and as a good read for armchair historians and aficionados of maritime history."-- John E. Worth, author of The Timucuan Chiefdoms of Spanish Florida

"An exciting 16th-century shipwreck story. . . . On another level, the narrative provides rare glimpses of the ethnology of the Mocama/Guale Native Americans and fascinating details of life aboard Spanish ships and at colonial St. Augustine."-- Eugene Lyon, author of The Enterprise of Florida and The Search for the Atocha

Among documents of Florida’s Spanish colonial period, few eyewitness accounts exist. One of these, the 1595 narrative by Fray Andrés de San Miguel, expertly translated by John Hann, describes the two-year odyssey of a teenager from Spain across the Atlantic to Mexico, Havana, and Florida and finally back to Spain. The future friar’s account of his experiences as a young sailor brings to life the fleets of the Golden Age of Spain and reveals how those adventures would change his life forever. It also provides vivid information about the Indians of the Georgia and Florida coast.

After Andrés’s ship passed Cape Canaveral, it was battered by a four-day storm and separated from the fleet. The officers commandeered the only launch and escaped; the crew kept the ship afloat and improvised a box-like vessel in which 30 survivors reached shore near the mouth of the Altamaha River--more dead than alive for lack of food and water. The author offers detailed descriptions of the Guale Indians and of Mission San Pedro Mocama on Cumberland Island. He also provides vignettes of life in St. Augustine and, on his way to Havana, of encounters with South Florida Indians who came out to trade and with a gentlemanly English pirate. The adventure closes with Fray Andrés’ return to Cadiz, where he witnessed the 1596 British siege and burning of that port.

Only seventeen years old at the time of the voyage, Fray Andrés presents a cold-eyed view of the sailing experience in the 16th century, trenchant observations on the behavior of the ship’s officers and the circumstances of the survival of the crew, and insight into the ambitions, concerns, and religiosity of the Spaniards. The book includes Hann’s translation of a brief introductory essay written by Fray Andrés’ Mexican publisher, telling of the young man’s entry into the Carmelites and the accomplishments of his later life as a church architect, builder, and hydrographic expert involved in the drainage of the valley of Mexico City.

John H. Hann is site historian at the San Luis Archaeological and Historic Site in Tallahassee. He is the author of A History of the Timucuan Indians and Missions (UPF, 1996), Missions to the Calusa (UPF, 1991), and many other books and articles.