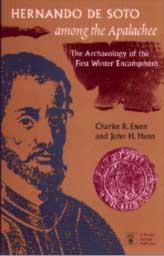 "Indispensable. . . . Will be of interest to southeastern archaeologists, historians of Hispanic America, scholars interested in the early exploration of the Americas . . . and laymen in Florida and surrounding states."--Charles Hudson, University of Georgia

Charles Ewen and John Hann chronicle the discovery and excavation of the only known campsite of Hernando de Soto's ten-state odyssey in La Florida during the 16th century. Located in downtown Tallahassee in sight of the state capitol, the site was rescued at the last minute from developers—a story almost as compelling as that of de Soto’s expedition.
The book has three parts: historical background, archaeological excavations at the site, and a retranslation of the 16th-century narratives relating to the winter encampment. A prologue and epilogue fit the work into the wider context of the Contact Period.
John Hann has retranslated the narratives of the De Soto expedition in Apalachee Province--with startling results. Small liberties taken with the original translations presented a misleading picture of the Apalachee and their culture. These versions, coupled with evidence recovered from the winter site, give a new view of the impact of Europeans on the native inhabitants of La Florida.
Of particular interest are the discovery, excavation, and preservation of the site. Showing how luck and timing are crucial factors in some important discoveries, Ewen and Hann describe the interaction of archaeologists with private developers, state and city government, and the public and the media. Although it contains information that will be useful to scholars, the book is written in a popular style that makes it accessible to general readers.


Charles R. Ewen, associate professor of anthropology at East Carolina University in Greenville, North Carolina, is the author of From Spaniard to Creole: The Archaeology of Cultural Formation at Puerto Real, Haiti.

John H. Hann is a research historian at the San Luis Historical Site and a leading scholar on the missions of Spanish Florida. He is the author of Apalachee: The Land Between the Rivers (UPF, 1988), Missions to the Calusa (UPF, 1991), and History of the Timucua Indians and Missions (UPF, 1996).

"manages to intertwine anthropology and archaeology with a good storytelling that will keep any reader riveted." "The tale of the excavation of the only known campsite of de Soto is a fascinating one, and the book's authors handle it superbly." "The fact that Ewen and Hann actually deal with real-life events - and a subject most of us associate with seventh grade social studies classes - and weave them into a suspense story, makes the book that much more of an accomplishment."
--Lake City Reporter

"Charles R. Ewen and John H. Hann cover the background and circumstances of the de Soto 'entrada' and the remarkable story of how the site and some 80,000 artifacts were found." "Included are four original narratives of the winter encampment by expedition members retranslated, with greater accuracy by that magisterial historian of both the Apalachee and the Timucua, John Hann." -- Florida Times-Union
--Florida Times-Union

"The authors present scientifically useful information in an extremely accessible style. Recommended for anyone interested in historic archaeology of the Americas." -- Choice
--Choice

"An excellent example of integration of anthropology, archaeology, and ethnohistory . . . an enjoyable reading experience for anyone who reads nonfiction." -- Marion Maturity
--Marion Maturity

"Ewen and Hann have captured the excitement, tension, commitment, and scholarship that made excavation of the deSoto/Apalachee Site in Tallahassee a landmark in local preservation. . . a book that will be enjoyed by people interested in archaeology, Florida history, and Spanish enterprise in the New World." -- Florida Heritage
--Florida Heritage

"A fascinating book, the scope of which far transcends the sort of technical archaeological report suggested by the title. . . . Ewen and Hann are to be congratulated for producing a highly readable book that successfully conveys to scholarly and popular audiences alike the excitement of archaeological and historical discovery." -- Sixteenth Century Journal
--Sixteenth Century Journal

"[A] compelling story, not only of the archaeological excavation of the Governor Martin site, but also the drama of the Spanish and Native American encounter during the 1539-40 winter in northern Florida. . . . I highly recommend this volume to anyone interested in the contact period Southeast. Ewen and Hann are to be congratulated on writing a book that will hold the public's attention and yet satisfy the scholarly demand for accuracy and scientific integrity. The University of Florida Press has produced another fine, reasonably priced, and well-produced addition to the Ripley P. Bullen series." -- American Antiquity
--American Antiquity

"Unlike the usual grinding of teeth that I experience in reading a De Soto volume, however, I enjoyed this book. It is very well written and reasoned. For the first time, it does appear that a good case can be made for pinning down our errant friend to a specific location. It thus becomes the base upon which all future archaeological studies of the expedition must be founded. . . . It can, I think, now be acknowledged that the discovery, identification, excavation, and validation of the Governor Martin site is 'the crowning achievement of recent scholarly efforts to determine more precisely the route of the de Soto expedition (Wilford May 19, 1987)' . . . . [It] offers a good example of the close integration of history and archaeology that we expect, but rarely realize, in the practice of historical archaeology."-- Journal of Field Archaeology
--Journal of Field Archaeology

"Collaborations between archaeologists and historians represent a new genre in scholarship, and both disciplines will find much to like in this book." "highly recommended for upper-division and graduate classes in Florida and southeastern history and archaeology."
--H-Net Reviews