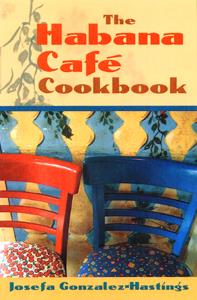 "Reading this book is like sitting at the Gonzalez-Hastings kitchen table with a cup of espresso, exchanging favorite Cuban recipes with your best friend."--Pat Baldwin, retired food editor, St. Petersburg Times

Culinary wizard and cafe owner Josefa Gonzalez-Hastings offers this extravagance of Cuban cooking as a celebration of her heritage. Many of the recipes were passed down to her from her mother and aunts; others are "nuevo Latino cuisine"--a fusion of traditional Cuban foods with modern dishes. Cuban food and preparation always has been varied, she says, flavored by the ancestry of the island, with contributions from Spanish conquistadors, African slaves, Asian laborers, and Indian natives.

"In my Cuban family," she writes, "two things were always certain-- food and good times." Gonzalez-Hastings shares family stories and photographs of life in pre-Castro Cuba, re-creating the days when Havana was a dining mecca, Ernest Hemingway frequented La Floridita restaurant, and the island gave birth to the daiquiri.

Josefa Gonzalez-Hastings is head chef and owner of the Habana Cafe in Gulfport, Florida.

" The book is a celebration of family and lusty cuisine spread throughout the United States by the many people who left Cuba after Fidel Castro took control in 1959".
--St Petersburg Times

"a welcome and recommended addition to any and all kitchen cookbook collections!"
--The Midwest Book Review