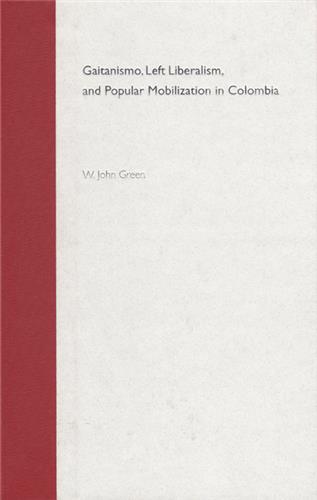 "The breadth of Green's research and the originality of his ideas are truly impressive. In addition to the whole phenomenon of Gaitanismo, one can learn an enormous amount about the interworking of Colombian politics and especially the role played by gamonales and fraud in local and national elections."--Jane Rausch, University of Massachusetts, Amherst

"A definitive study of the intellectual and social sources of gaitanismo."--James D. Henderson, Coastal Carolina University

Jorge Eliecer Gaitan, Colombia's leftist political leader from 1928 until his assassination in 1948, gave rise to the country's liberal populist movement, Gaitanismo. His leadership and his assassination, followed by the brutal suppression of the movement and its followers, sparked the civil war, or La Violencia, and the violent political process that continues throughout Colombia today.

Using previously unexamined letters by Gaitan and his followers, W. John Green chronicles the rise of Gaitanismo and the reasons for its initial success and ultimate failure. Grounded in the rich correspondence between Gaitan and his supporters, interviews, and the vibrant Gaitanista press, this work focuses on the dynamics of popular political mobilization. It delves into the movement's left-Liberal ideological roots and examines the Gaitanistas' obsession with democracy and social justice.

Green provides an insightful portrait of Gaitan as a labor lawyer, deeply connected to the pueblo, who was more the symbol for the movement than the cause. He illuminates the connection between Gaitanismo/La Violencia and the continuing popular violence in Colombia, the distinctions between populism in Latin America and European fascism, Gaitanismo's development into a multi-class movement that superseded gender, race, and regionalism, and the maintenance of Colombia's long-standing formal democracy.

W. John Green is an independent scholar and consultant who has published widely on 20th-century Colombian history.

"Particularly useful in mining the correspondence and publications of Gaitan's provincial followers." "Green's book, with its attention to the beliefs of Gaitan's supporters in the provinces and in the popular classes, is a welcome addition to the literature on this Colombian populist martyr and his movement."
--Caribbean and Latin America

"Green's study of Gaitanismo is the single most complete and thorough work on the topic to date and marks an important contribution to the study of the twentieth-century Colombian politics as a whole. It will be of interest not only to colombianistas but to scholars of Latin America interested in comparative politics, popular political struggles and thought, and mid-century debates about social justice, mass politics and reform. It is an ideal book for adoption in upper-division seminars concerned with social movements or twentieth century comparative political history."
--The Americas

"A major contribution to the historiography of social movements, populism, and popular agency in Colombia and in Latin America ,and it will certainly generate much fruitful debate among Latin Americans interested in these topics."
--HAHR