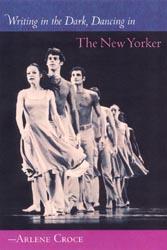 "Croce is the Jane Austen of dance criticism . . . in breadth as well as in intensity the best dance critic around." --The New York Times Book Review

"This substantial collection will stand as an essential guide to the dance of a demanding and exciting era." --Booklist

For twenty-five years, Arlene Croce was The New Yorker's dance critic, a post the magazine created expressly for her. Her entertaining, forthright, passionate reviews and essays revealed the logic and history of ballet, modern dance, and their postmodern variants to a generation of theatergoers. This volume contains her most significant and provocative pieces--over a fourth of which never appeared in book form--covering classical ballets, the rise of George Balanchine, the careers of Twyla Tharp, Mark Morris, and Merce Cunningham, and the controversies surrounding many of the twentieth century’s great dance companies.

From 1973 to 1998, Arlene Croce explored the world of dance for readers of the New Yorker. She is the author of The Fred Astaire and Ginger Rogers Book, Afterimages, Sight Lines, and Going to the Dance.

"Covering dance from the 70's on, Croce offers her pieces, warts and all, to readers in a more portable form."
--Dancer Magazine

"Her writing is packed with information as well as opinions about dancing, but also carries the sense of deep thinking about the nature and art of performance."
--DANZ Quarterly (New Zealand)

One book a serious dancegoer should not be without…Croce is to dance what Pauline Kael is to film: incisive, witty, sometimes arbitrary, one of the great dance writers about a difficult subject.
--Westsider, New York

By With To & From: A Lincoln Kirstein Reader