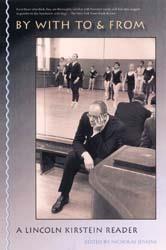 By With To & From
A Lincoln Kirstein Reader

"Even those who think they are thoroughly familiar with Kirstein's works will find new nuggets to ponder in this handsome anthology."--The New York Times Book Review.

"Kirstein's style is literary and thoughtful, while its forthright panache reveals the author in his character as one of the century's great impresarios."--Publishers Weekly
"This collection of essays and poems highlights Kirstein's literary talents. Jenkins has done a fine job of choosing and introducing the previously published and unpublished pieces from Kirstein's prolific writings. . . . What emerges is an endearing portrait of an erudite gentleman who has enriched our culture."--Library Journal
Lincoln Kirstein's writing is a notable example of a wide historical awareness that was fired by passion and guided by taste. He established his interests in art and literature as an undergraduate at Harvard during the late 1920s. There he started the famous quarterly Hound & Horn, a magazine that published the work of such writers as James Joyce and Gertrude Stein, and also cofounded the Harvard Society for Contemporary Art, which exhibited the work of cutting-edge artists. Best known for his pioneering efforts to cultivate ballet in the United States, he actively pursued a professional partnership with legendary choreographer George Balanchine, with whom he founded both the School of American Ballet and the New York City Ballet.

This collection, in paperback for the first time, showcases Kirstein's knowledge of dance, painting, photography, theatre, politics, and literature and combines many of his best-known and most authoritative statements with less familiar but equally brilliant polemics and appreciations. Along with autobiographical essays and poetry, his commentary covers such diverse personalities as composer Igor Stravinsky, photographer Walker Evans, author Ernest Hemingway, actress Marilyn Monroe, and Robert Gould Shaw, leader of the courageous black Civil War regiment. The book also contains photographs from Kirstein's private collection--portraits of himself and other famous artists of the time, such as Diaghilev, Cocteau, and Eisenstein, among others.

"Kirstein was interested in everything that was interesting, and this book is a record of a superb mind accompanied by a passionate heart."
--Palm Beach Post

"Throughout, Kirstein remains patrician, cranky, and intoxicatingly judgmental. Yet his credo that the ballet language exerts a moral force bears consideration in an era when anything that moves is often construed as dance. To the end of his days, Kirstein kept the faith."
--Dance Magazine