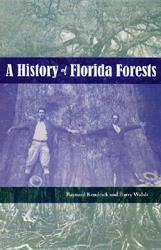 A History of Florida Forests

"The Kendrick manuscript illustrates and fully supports the claims of many that there was and still is a lot of gold in the green . . . Cleverly elevates the value of Florida's renewable natural resources and clearly lets you see the forests and the trees. When it comes to forest history, there is simply not another work like it!"--Jeff Doran, executive vice president, Florida Forestry Association

"An excellent account of how important Florida's forests have been in providing the capital to permit exciting and rapid growth and development during the last 150 years; moreover, we're still enjoying vast increasing areas of beautiful and useful trees."--Jacob B. Huffman, University of Florida

Five hundred years ago, when Ponce de Leon landed on the shores of Florida, 27 million acres of virgin timber--chiefly longleaf, slash pine and large areas of cypress, loblolly pine, sand pine, palms, and oaks--covered the land that constitutes the state today. Of the 15 million acres now forested, 12 million are privately held. This lively, 500-year history of Florida's forests begins before the Spaniards colonized the state, when Native American tribes felled trees to build shelters and canoes, carve ritual masks and weapons, and make firewood. These tribes revered Florida's forests; they understood the dangers of wildfires set by lightning and were careful when burning underbrush to improve forage or aid in the hunt. Their closeness to nature and dependence on forests for their way of life made Native Americans Florida's first "forest managers."

Florida historian Baynard Kendrick offers first-person accounts by the people who explored, logged, reforested, and managed Florida's forests. His chapters feature correspondence from conquistadors as well as memoirs by early settlers, loggers, and mill operators whose work triggered a forest conservation movement in the 1920s. Commissioned by the Florida Board of Forestry in 1966 on the eve of the environmental era, Kendrick's manuscript--titled "Florida's Perpetual Forests"--went unpublished for four decades. Barry Walsh has picked up where Kendrick left off, making this the first book to fully document Florida's forest history through the modern day. Enlightening and accessible to a broad audience, this book will appeal to historians, conservationists, foresters, agricultural leaders, archaeologists, anthropologists, legislators, and many more.

Baynard Kendrick (1894-1977) was author of Florida Trails to Turnpikes. Organizer of the Mystery Writers of America, he wrote a series of detective novels, adapted several to movies and TV, and served on the board of Florida Historical Quarterly.

Barry Walsh is a freelance writer and editor who contributes to environmental journals. A columnist for The Longboat Observer, she has served as an editor with the Journal of Forestry and with Selby Botanical Gardens Press in Sarasota, Florida.

"Written in an engaging style. Beautifully illustrated with historic photos, this features various sources from memoirs of the conquistadores to first hand accounts from lumber company officials."
--Bella Online

"Anyone interested in Florida's forests would benefit by reading this book, and those interested in the history of forestry in this country, the southeast in particular, would find it valuable as well."
--Natural Areas Journal