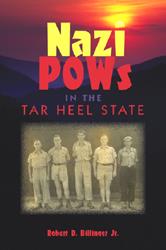 "No one tells the story of German POWs in America better than Robert Billinger. From its meticulous detailing of the prisoners' daily existence to its description of their positive contacts with surrounding civilians, Nazi POWs in the Tar Heel State does much to explain how former enemies could become firm friends and allies."--Lewis Carlson, author of Red Tail Captured, Red Tail Free: The Memoirs of a World War II Tuskegee Airman and POW

"Well written and sprinkled with highly interesting anecdotes, Billinger examines all aspects of the POW program in North Carolina during World War II, from the arrival of the first prisoners to the work program, escapes, reeducation, repatriation, and--an aspect often ignored by other authors--the transfer of many POWs to Great Britain, France, and Belgium after the war."--Matthias Reiss, author of "The Blacks Were Our Friends": German Prisoners of War in American Society, 1942-1946

More than 10,000 German prisoners of war were interned in eighteen camps in North Carolina during World War II. Yet apart from the guards, civilian workers, and FBI and local police who tracked escapees, most people were--and remain--unaware of their presence.

Billinger captures the perceptions of sixty years ago, and demonstrates how the stereotype that all Germans were Nazis evolved over time. The book is dedicated to the insights gained by many POWs, guards, and civilians: that wartime enemies could become life-long friends.

"A valuable contribution to the study of WWII captivity in the United States. Billinger's affection for his subject is evident in his writing, and this book will appeal to readers with an interest in North Carolina history, the experiences of POWs during WWII, and postwar German-American relations."
--H-Net Reviwes

"Employing a narrative style and focusing on seven internees, Billinger provides an even handed description of the POW experience from arrival until release. A significant resource for those studying North Carolina history during W W II."
--Choice

"This is bottom-up history at its best."
--The Journal of Southern History

"The strength of Billinger's account lies in putting a face on this vast mass of dejected humanity by weaving many personal stories of POWs into the narrative."
--The Journal of American History

"Readers interested in the local history of North Carolina should find the anecdotes interesting and very informative."
--American Studies

Hitler's Soldiers in the Sunshine State: German POWs in Florida