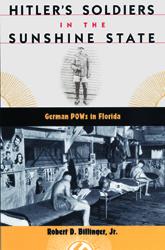 Hitler's Soldiers in the Sunshine State
German POWs in Florida


"By turning diversity into the central notion of this study, Billinger brings a novel approach to research on German POWs. The focus on a particular camp [Camp Blanding] and the careful attention that is given to detail and individual life stories present us with a multifaceted and intriguing picture of the German POW experience in the United States."--Philipp Gassert, German Historical Institute


In the first book-length treatment of the German prisoner of war experience in Florida during World War II, Robert D. Billinger, Jr., tells the story of the 10,000 men who were "guests" of Uncle Sam in a tropical paradise that for some became a tropical hell.

Having been captured while serving on U-boats off the Carolinas, with the Afrika Korps in Tunisia, with the paratroops in Italy, or with labor battalions in France, the POWs were among the 378,000 Germans held as prisoners in 45 states.
Except for the servicemen who guarded them, the civilian pulp-cutters, citrus growers, and sugarcane foremen who worked them, and the FBI and local police who tracked the escapees among them, most people were--and still are--unaware of the German POWs who inhabited the 27 camps that dotted the Sunshine State.

Billinger describes the experiences of the Germans and their captors as both sides came to the realization that, while the Germans’ worst enemies were often their own comrades-in-arms, wartime enemies might also become life-long friends.
Concentrating especially on the story of Camp Blanding in North Florida, Billinger based his research on both American and German archives. His account mixes rare photos with interviews with former prisoners; reports by the International Red Cross, the YMCA, and the U.S. military; and local newspaper articles.

This book will be of great value to scholars and historians, as well as all readers with an interest in World War II. Those with an interest in Florida history will also find much to admire in this engaging account of a barely known wartime episode.

Robert D. Billinger Jr.'s study of German POWs trapped in the golden cage of wartime Florida is a labor of love. In his well researched study of the culture and politics of prison camps, Billinger conveys the complexity of camp life. Where Nazis, anti-Nazis, democrats, Communists, Nationalists, and the politically indifferent where thrown together in highly politically unusual circumstances.
--Journal of American History

The newest and one of the best state studies, Robert Billinger's Hitler's Soldiers in the Sunshine State, concerns the German POW's experiences in Florida. Billinger is a wonderful storyteller who follows the German prisoners as they arrive, settle in, and go to work. At every junction the author draws upon documents from the Provost Marshal General's Office, recollections and stories from local newspapers. A major contribution Billinger makes to our rapidly expanding knowledge of the German POW experience in America.
--Journal of Southern History

An informative look into the lives of German prisoners of war in Florida during World War II.
--Southern Historian

Billinger has created a story that not only is hard to put down but also enlightens.
--Daytona Beach News-Journal

The narrative is lively, and not bereft of information about an aspect of World War II that is often overlooked.
--Orlando Sentinel

A valuable and interesting addition to World War II history as well as the history of the Sunshine State, "a tropical paradise that for some became a tropical hell."
--Ocala Star-Banner

A solid, well-researched, well-conceived work of valuable scholarship. An excellent and important work. The portions of the book covering the experiences of individual German prisoners are especially compelling.
--Georgia Historical Quarterly

In his well researched study of the culture and politics of prison camps, Billinger conveys the complexity of camp life, where Nazis, Anti- Nazis, democrats, Communists, nationalists, and the politically indifferent were thrown together in highly unusual circumstances.
--Journal of American History

Readers of this fine book will find it a significant contribution to the history of Florida during World War II. It is well documented, well organized, and written in a clear style. We certainly have here a valuable book.
--Florida Historical Quarterly

Gives great insight into the experience and perspectives of prisoners and captors alike.
--H-Net Book Review