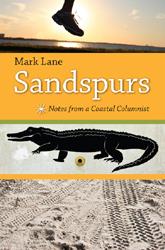 Sandspurs
Notes from a Coastal Columnist

A humorous take on Florida's people, politics, places, and peculiarities

"Mark Lane is a fresh and weird original voice in Florida writing. He is the best thing to come out of Daytona since Bike Week."--William McKeen, author of Tom Wolfe, Bob Dylan, and Highway 61

"Sandspurs throws everyday concerns at us Floridians, then makes us laugh at our own misadventures."--Stuart B. McIver, author of Hemingway's Key West

"Lane is a Florida treasure."--Gary Mormino, author of Land of Sunshine, State of Dreams

Far from the myth of surf, sand, and orange juice, Mark Lane's snapshots of life in the Sunshine State are more likely to feature gargantuan insects than bikini-clad coeds.

Lane has spent nearly thirty years as a reporter and writer for the Daytona Beach News-Journal. Often compared to Carl Hiaasen, Dave Barry, Jeff Klinkenberg, or Roy Blount Jr., over the past decade his columns have built an intensely loyal following.

Lane's writing is a model of crisp prose. But he is hard to pin down. One moment full of cynicism from decades of listening to fast-talking real-estate developers and lawyers, the next displaying a fierce defensiveness to those who would sweep away the honky-tonk bars and alligator farms that, in his opinion, define the state.

His trips to the all-U-can-eat buffet of Florida eccentricities include gardening in a five-season climate (spring, summer, ultrasummer, fallish, and winterish), insights on home fortifications in the face of oncoming hurricanes (definition of an optimist: somebody who takes down his plywood), notes on the World's Most Famous Beach, and commentary on the two biggest shows in the state: NASCAR and state politics.

Sandspurs will allow readers nationwide to discover one of Florida's most gifted writers.