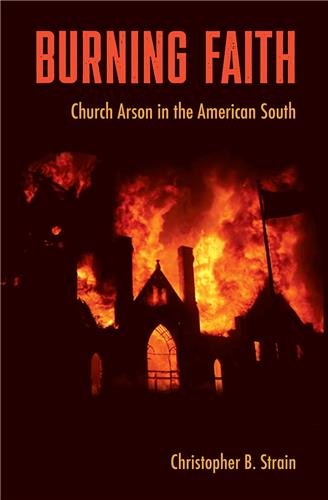 
“A well-researched survey of the church fires of the 1990s.”––Choice

“The story of this chapter in American cultural history is complex and has been vastly understudied. . . . Strain makes a significant contribution . . . Those interested in the construction of racial meanings and the nature of national conversations about race in our society should study this case.”—Politics and Religion

“Even though racial prejudice was only one of several factors in church arsons during this era, Strain demonstrates how the image of a burned black church resonated with both black and white Americans.”—Journal of African American History

“Strain documents the dizzying number of black church burnings credited to arson throughout the South, and, additionally, he notes church burnings in the north in primarily white attended churches. . . . Meticulously researched.”—Louisiana History

"A thoroughly researched examination of events that alarmed Americans in the 1990s. Strain provides a sophisticated dissection of the many forces, people, and events at the center of what many regarded as a national crisis."--Jeffrey O. G. Ogbar, University of Connecticut

"As the first book-length look into one of the earliest and most racially and religiously explosive issues sweeping the nation in the 1990s, Burning Faith now places Christopher Strain among the pioneering historians today writing on post-Cold War America."--Devin Fergus, Vanderbilt University

In the 1990s, churches across the southeastern United States were targeted and set ablaze. These arsonists predominately targeted African American congregations and captured the attention of the media nationwide. Using oral histories, newspaper accounts, and governmental reports, Christopher Strain gives a chronological account of the series of church fires.

Burning Faith considers the various forces at work, including government responses, civil rights groups, religious forces, and media coverage, in providing a thorough, comprehensive analysis of the events and their fallout. Arguing that these church fires symbolize the breakdown of communal bonds in the nation, Strain appeals for the revitalization of united Americans and the return to a sense of community.

Combining scholarly sophistication with popular readability, Strain has produced one of the first histories of the last decade that demonstrates that the increasing fragmentation of community in America runs deeper than race relations or prejudice.

A volume in the series Southern Dissent, edited by Stanley Harrold and Randall M. Miller

Christopher B. Strain, professor of history and American studies at the Wilkes Honors College of Florida Atlantic University, is the author of Pure Fire: Self-Defense as Activism in the Civil Rights Era.

"A well-researched survey of the church fires of the 1990s. The lesson of the fires is the need for civility. Strain also compares these burnings to those of the civil rights era and the attacks on mosques after 9/11."
--Choice