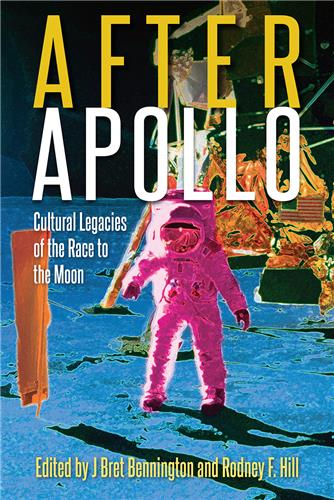 After Apollo
Cultural Legacies of the Race to the Moon

“After Apollo is a significant achievement for the way it helps us see the Apollo Moon landing as most never have before—from the vantages of both those personally involved and those broadly affected by it. The result is a fresh focus on the historical and cultural complexities that, then and now, are a part of this momentous human achievement.”—J. P. Telotte, author of Selling Science Fiction Cinema: Making and Marketing a Genre

“Reveals layers of the everlasting influence of Apollo, from the chemical ingenuity of select technologies, to the production of emotional cultural experiences inspired by the wonder of astronauts’ perspectives, to the impact on marginalized populations.”—Katarzyna Balug, Harvard University

After Apollo explores how NASA’s space program impacted American society during and after the race to the Moon, looking back at the 1969 Apollo 11 Moon landing from the perspective of the present day. Centering on the human dimension of spaceflight, this multidisciplinary book contains chapters that address the effects of the space race on science, politics, art, fashion, and popular culture.

Several essays cover themes that directly touch on the space program itself, such as the sheer improbability of the Moon landing, the hidden chemistry behind human spaceflight, and the critical role played by immigrants in making space exploration a reality. Others consider societal repercussions, such as how immense space expenditures drew attention to underfunded social programs and paved the way for Great Society social legislation, as well as how cultural narratives of exploration and the frontier evolved as the program’s goals changed. Many of the authors look at the interplay between art and space exploration, beginning with the role of popular entertainment in selling spaceflight to the public.

Showcasing the work of contributors representing diverse areas of study, After Apollo details the many and varied human impacts and cultural spin-offs that came to pass as the mythology and eventual reality of space travel permeated American society.

J Bret Bennington, professor of geology and chair of the Department of Geology, Environment, and Sustainability at Hofstra University, is coeditor of The 1930s: The Reality and the Promise. Rodney F. Hill, associate professor of film and chair of the Department of Radio, Television, Film at Hofstra University, is coauthor of The Encyclopedia of Stanley Kubrick.